A Professional Lesson from the Pyramids (& a Big Discovery)

You’ve probably seen the news that Egypt’s Ministry of antiquities, along with some assistance from the Faculty of Engineering of Cairo have undertaken a large-scale project to capture the pyramids of Giza in 3D. (If you haven’t, here’s a good, quick overview.)

Though the main goal of capturing the pyramids is gathering actionable data for the Egyptologists, the engineers are providing an even greater service to the professional community by demonstrating the power of using the right tool for the right job.

A Big Lesson
To capture the pyramids, the team is using a whole raft of different technologies, each one gathering its own specific sort of data. It’s a master class. 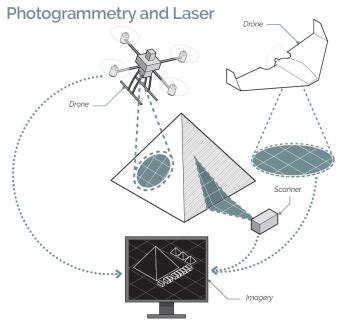 Most interesting for us, they’re using two sets of UAVs to perform laser scanning and photogrammetric measurements of the pyramids. The first set of drones are fixed-wing–meaning they’re designed like small airplanes–and will fly over the pyramids with laser scanners to capture the surrounding environment. Reports say that they will be capturing with accuracy of about 5cm, more than enough to build a 3D model that shows information about surrounding monuments, construction debris, and so on.

The next set of UAVs are multi-rotors–like little helicopters–that are outfitted with cameras. They’ll hover close to the pyramids, snap pictures, and build models of the pyramids themselves to track the slope, as well as “alignment and assembly of the stone blocks and possibly texture traces of tool marks.”

As if that weren’t enough to convince you that these guys know exactly how to use every tool in their toolbox, they’re also performing muon detection. This involves using radiography to sense muons, unstable particles that bombard the earth and pass through the walls of the pyramid to accumulate inside. Detecting these muons will allow the researchers to discern the makeup of the pyramids by seeing where muons pass, and where they are deflected.

They’ve also been using thermal cameras, which has returned the first big results.

A Big Discovery
Two weeks into the capture and the team has found higher temperatures in three adjacent stones at the bottom of the Great Pyramid. The BBC explains that possible causes “included the existence of empty areas inside the pyramid, internal air currents, or the use of different building materials.

What does it mean? No one is sure yet. But they certainly wouldn’t have gotten this far if they weren’t smart about selecting their tools.