The Fully Operational Systems
The GPS system is one component of the worldwide effort known as the Global Navigation Satellite System (GNSS). Another component of GNSS is the GLONASS system of the Russian Federation and a third is the Galileo system administered by the EU. It is likely that more constellations will be included in GNSS, such as the Japanese Quasi-Zenith Satellite System (QZSS), the Indian Regional Navigation Satellite System (IRNSS) and the Chinese BeiDou Satellite Navigation and Positioning System. They will be augmented by both ground-based augmentation systems (GBAS) and space-based augmentation systems (SBAS) deployed by the United States, Europe, Japan, China, and Australia.  The two systems that are fully operational now are GPS and GLONASS. 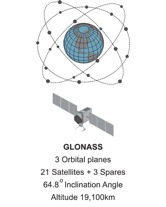 GLONASS
Russia’s (Globalnaya Navigationnaya Sputnikovaya Sistema, Global Orbiting Navi­gation Satellite System), known as GLONASS, did not reach full operational status before the collapse of the Soviet Union.  The first Uragan satellites reached orbit in October 1982, a bit more than 4 years after the GPS constellation was begun. There were 87 Uragan satellites launched and a nearly full constellation of 24 made up of 21 satellites in 3 orbital planes, with 3 on-orbit spares was achieved in 1996.

However, only about 7 healthy satellites remained on orbit about 1000 km lower than the orbit of GPS satellites in 2001. And the remaining 7 were only expected to have a design life of 3 years. The situation was not helped by the independence of Kazakhstan, subsequent difficulties over the Baikonur Cosmodrome launch facility, and lack of funds. The system was in poor health when a decision was taken in August 2001 outlining a program to rebuild and modernize GLONASS. Improvements followed.

Today Russia’s GLONASS is operational and has worldwide coverage.  A complete GLONASS constellation of improved satellites is in place at the altitude of 19,100 km inclined 64.8 degrees toward the Equator.

Signals
There is significance in the fact that GLONASS signals are subject to a different modulation strategy than are the GPS signals. The GLONASS satellites transmit L-band signals, and unlike GPS each code a GLONASS receiver collects from any one of the GLONASS satellites is exactly the same. Also unlike GPS, each GLONASS satellite broadcasts its codes at its own unique assigned frequency. This is known as FDMA (Frequency Division Multiple Access).      This means that the system requires more complex hardware and software development. Also, utilizing so many fre­quencies makes it difficult to accommodate the wide variety of propagation rates while keeping the ephemeris information sent to the receivers within good limits. There are a number of receiver manufacturers that have GPS/GLONASS receivers avail­able but the differences between FDMA and CDMA signals increases the technical difficulty and costs of such equipment.

There are some changes to the FDMA approach underway.  GLONASS will assign the same frequency to satellites that are in the same orbital plane but are always on opposite sides of the earth. This will not only reduce the amount of the radio spectrum used by GLONASS; it may actually improve its broadcast ephemeris information.  Further, GLONASS probably will likely implement signals that use the same modulation scheme as GPS, Code Division Multiple Access CDMA, on the third frequency and at L1. This will make it easier for GPS and Galileo to be interoperable with GLONASS and will probably improve GLONASS’s commercial viability.

Interoperability
The objectives of this cooperation are interoperability and compatibility. Interoperability is the idea that properly equipped receivers will be able to obtain useful signals from all available satellites in all the constellations and have their solutions improved rather than impeded by the various configurations of the different satellite broadcasts. Compatibility refers to the ability of U.S. and foreign space-based positioning, navigation, and timing services to be used separately or together without interfering with use of each individual service or signal.

One immediate effect of GNSS is the substantial growth of the available constellation of satellites, the more signals that are available for positioning and navigation, the bet­ter. The concept is that these networks of satellites and others will begin to work together to provide positioning, navigation, and timing solutions to users around the world.