A Solution to Localize Mobile Scanners in Indoor Environments

Why this solution might be the future of automated indoor scanning.

We’ve all seen one or two of what you might call… creative LiDAR implementations. First in my mind, of course, is the Zebedee solution that 3D Laser Systems debuted at SPAR Europe 2012, a device that lets you map a space at the speed it takes to walk through it, all by flopping a sensor around on a springy stick. Well, if this indoor measuring system pioneered by Aalto University in Finland catches on, you’ll soon be able to map a large indoor environment by literally rolling your scanner through it.

The prototype for the system, named VILMA, features a FARO Focus3D embedded between two round disks. It’s a scanner inside a hollow wheel that the researchers set rolling through a room with a gentle push.

It may seem odd (and terrifying) to use, but a blog post explaining the system says that it has allowed researchers to localize the scanner without the use of external inertial or rotational sensors. More importantly, though, it has allowed them to localize the scanner in indoor environments where satellite navigation systems, the most common method of localization, are not available.

Simply put, the solution used by VILMA would allow you to perform mobile 3D scans in parking garages, in tunnels, and in a number of indoor environments where mobile scanning was previously impossible. The solution looks odd, but it might be the best news you’ve heard in years.

For nerve-wracking video of the scanner at work (and some math that is totally over my head), click below.

How does it work?
Ville Lehtola, the lead author on the study explained to me that the key to VILMA’s success is the wheel design, which restricts the scanner’s freedom so that it can move only in a straight line. This considerably reduces the number of unknowns when calculating the scanner’s location. “In our work,” he said, “we have taken away all but one spatial degree of freedom so that the localization can be solved without sensors, using only the laser distance data.”

This method of determining the sensor’s location from the point cloud data it collects is called “intrinsic localization,” and the researchers say that point cloud generation is essentially automatic, except for the effort it takes to get the scanning data from the scanner to the computer.

But there are still kinks to work out. For instance, VILMA currently assumes that the floor of the mapped area is flat. It also assumes that the wheel is always moving in a perfectly straight line. These levels of perfection, as we know, are impossible to achieve in practice, and this means that the data taken by VILMA is a little bit warped.

Still, when the researchers tested VILMA in a parking garage with a sloped floor, the results were impressive. Comparing VILMA’s measurements to those gathered with a terrestrial scanner, they found the new solution was accurate to 1:300 object size. Not bad for a first try.

And the team is already working on improvements. There are solutions in the works to correct for sloped floors, and even a newer, more advanced prototype that will allow the rig to move freely around a floor rather than in a straight line. 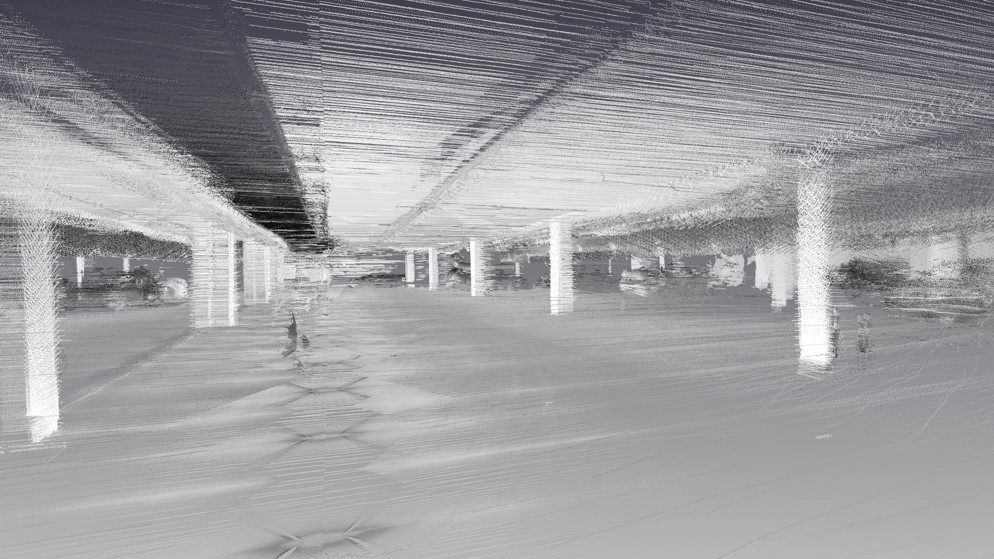 What Can It Do for Me?
The benefits of solving these problems would be huge. If the team solves these problems, Lehtola tells me, they will have the basis of a fully automatic indoor scanning solution. “It has huge potential,” he said, “since it affects all wheeled platforms including cars.”

This might put us tantalizingly close to a longtime industry holy grail: automatic updates to 3D models. Imagine if you could buy a few scanners, mount them in little rolling machines, and set them up to measure your facility weekly, monthly, or even multiple times a day. I’m sure I don’t have to convince you of the value there.

Though it wasn’t strictly relevant, I couldn’t help but ask Lehtola why he called the solution “VILMA,” and I’m glad I did. “I could say that it’s an abbreviation of ‘Ville Lehtola’s Mobile Apparatus’,” he said, “but Vilma is the name of my dearest daughter, for which I also have high hopes.”

For more information, contact Lehtola using the details on the last slide of that video, or find him through linkedin on this blog post.