The Apollo 11 moon landing is one of the signal accomplishments of the United States. As we approach the 50th anniversary of humans first putting boots on the moon, the Smithsonian museum is looking to preserve their Apollo 11 collection with a program they call “reboot the suit.”

As part of this program, the institution is raising money to preserve Commander Neil Armstrong’s spacesuit, a record of amazing journey, “down to the particles of lunar dust that cling to its surface.” If you donate, you might even get to print a copy for yourself.

According to the Kickstarter, spacesuits are among the most fragile artifacts in the Smithsonian’s collection. They were designed for one function: getting to the moon and back. But that’s about it–so they’re falling apart. Their colors are faded, their fabric is stained, and they are covered with odd repairs of uncertain origin. These objects need to be restored if they’re going to survive.

Armstrong’s spacesuit will serve as a pilot project. Experts will take the suit apart and determine best practices for preserving it, which will help them to “literally write the book on the proper techniques for spacesuit conservation for every suit in [Smithsonian’s] collection.”

Once it’s preserved, they’ll be able to start displaying it to the public again.

As part of the preservation process, they’ll be 3D scanning the whole shebang. “With a 3D scan of the suit,” they say, “you can take a self-guided tour and explore the functions of each of the suit’s 21 layers.” The 3D scan will also act as an incredibly detailed record of the suit in its current condition, helping the Smithsonian “to monitor and preserve the suit and protect it from further deterioration.” 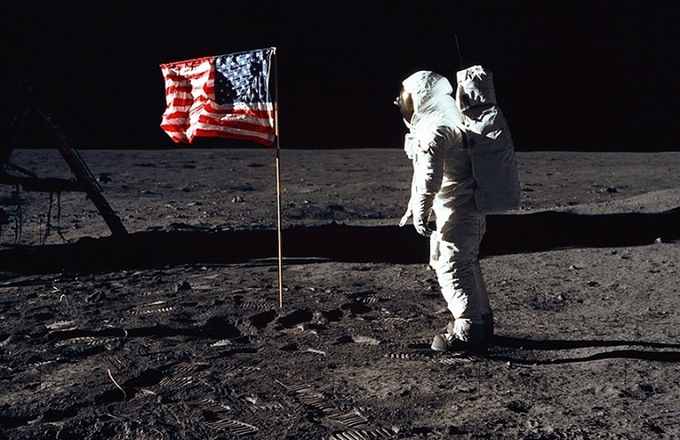 Pledge to the kickstarter and you’ll have early access to 3D scans (and maybe even a 3D print) of Neil’s glove. If you’re one of the more fanatical hobbyists out there, you could even 3D print your own suit and stage a moon landing in your backyard, or just print a glove to use when you barbecue. The possibilities are endless.

Other, less exciting perks for pledgers include t-shirts, posters, a video tour of the conservation process, invitation to an unveiling, and so on. I’d trade any of those for a 3D-printed space glove.

Think of it as a historical preservation on a smaller scale, and a step toward allowing the Smithsonian to display the suit to the public again. Without 3D scanning, they might have kept it locked up out of sight forever.

Capturing Apollo 11, "One of the Most Challenging Objects Ever Scanned"

Capturing Apollo 11, "One of the Most Challenging Objects Ever Scanned"