When this article popped up and promised that the 3M Buckley Innovation Centre had provided a new kind of mug shot, I was excited. It turned out to be true, but only in the way that the most click-bait-worthy headlines are true. “Tom Wright of Medilink in Sheffield,” the article explains, “can now impress his colleagues with a drinking mug featuring a 3D image of his own face.”

It turns out that Wright won the mug during an event at the Innovation Centre to celebrate World Metrology Day. Imagine looking at your own mug on a mug before you’ve had a chance to drink a morning coffee. No thank you.

This got me thinking–does anyone use 3D for mug shots?

From my quick research, it seems like 3D mug shots aren’t in wide use, but not for lack of trying. For instance, forensics experts have developed a way (as recently as last year) to create 3D mug shots from DNA.

Researchers from Pennsylvania State University have been working to determine how genetic codes are connected to our facial appearance. For a paper they released last year, they announced that they were able to predict a 3D model of a person’s face by examining their DNA for only 24 genetic variations in 20 different genes.

The idea is exciting, but it’s probably a long way off.

“One thing we’re certain of: there’s no single gene that suddenly makes your nose big or small,” says Kun Tang, a biologist at the Shanghai Institutes for Biological Sciences in China.

What about 3D scanning faces for real mug shots, then? 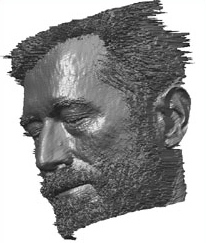 from 15 years ago includes an article about MIT’s Lincoln Laboratory working on Accordion Fringe Interferometry (AFI) device to 3D-scan crime scenes for details as well as the faces of the criminals. Researchers hoped you’d be able to sit the subject in a dentist-style chair and take a shot in seconds. Then, they would use the model to simulate different angles and different lighting conditions.

“Traditional 2-D mugs, long the standard in suspect identification, have obvious limitations,” the website notes. “Authorities typically photograph a suspect from only two angles, under a single lighting condition. A witness to the crime, however, may have caught a fleeting glimpse of the suspect in the dark, or a security camera may have captured his or her blurry image from only one unnatural angle.”

So wouldn’t it be great to have those mug shots in 3D? Whatever happened to our dreams of 3D-imaging every mug that filed through a police station? Do you know?

LiDAR Shows that Trees Sleep, Too