An artist’s impression of the Sensor City building. Source.

Last week I attended a briefing event for Sensor City in Liverpool, UK. Sensor City is a £15 million ($30 million) joint venture between Liverpool University and Liverpool John Moores University that is part funded by the UK government; it is going to be an innovation hub for start-ups providing sensor-related propositions. Why sensors? For one, both universities have strong electronics, imaging, and computing research programs. Moreover, as the University of Liverpool has argued about the value of the sensor industry in a December 2014 press release:

“The market for sensor systems is estimated to be £310 billion globally and is growing at over 10% per annum. The UK sensor industry is a £13 billion per annum sector supporting 70,000 jobs and producing £6 billion in exports. Around 1.4 million people in the UK are employed in sensor-aligned professions of which 159,000 are in the North West and 27,000 are in the Liverpool City Region.”

Put differently, the sensor industry is already large and continuing to grow. This means a lot of future opportunities for the 3D-imaging industry.

Due to open in early 2017, Sensor City consists of a building complex that will provide incubator office space and support services to new technology firms at various stages in their lifecycle. Many of these new ventures are likely to be spin offs from the universities involved or more straightforward collaborations. In short, it is often said that universities are fantastic at generating innovative ideas, but not so good at commercializing these; Sensor City should go a significant way to rectify this situation.

The briefing event I attended was called “Doing business with Sensor City”, and it was designed for a few purposes. It informed attendees about plans for the new building, offered updates on the UK government-led funding models that are available to innovative start-ups, and presented past experiences of commercializing sensor-based ideas.

While not specifically targeted towards the 3D Imaging community, presenters from companies such as Chronos Technology (http://www.chronos.co.uk/index.php/en/) and Telent Technology Services (http://telent.com/) recounted their experiences of working in collaborative partnerships to implement sensor networks within domains such as GPS monitoring for the security industry and railway track condition monitoring. Next, IBM discussed areas in which they would like to work collaboratively – especially on projects that use their “internet of things” starter kits to test concepts for new sensors.

The event featured formal presentations by successful recipients of funding, and a forum for 1.5-minute quick-fire pitches from firms looking to become part of the Sensor City community. Participants in the quick-fire forum were simply asked to state who they were, what they do, and what they would like. Hopefully this will have helped to spark some initial collaborations. 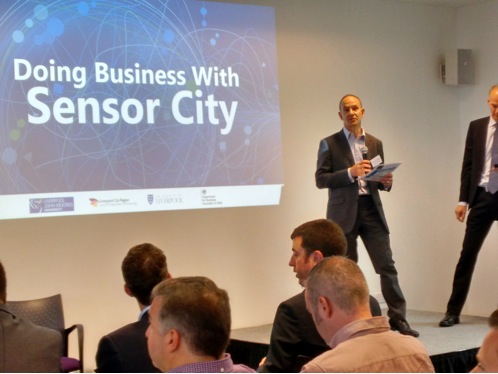 The 3D-imaging industry can be considered as a niche within the wider sensor technology community. For those who are located in Liverpool or the north west of England, and are looking to commercialize a new innovative 3D Imaging idea, Sensor City presents a real opportunity.

There were a couple of consistent themes repeated through the day that any group looking to innovate technology should remember:

I have blogged previously on how, in the 3D Imaging community, we can be focused on the use of scanners that are ever faster, higher-resolution, or just produce more awesome data in general. As scanners are increasingly seen as commodities, increased investment in the sensor community provides new opportunities for new types of 3D Imaging sensors and involvement in new industries. What is further highlighted though is the need to take a step back to not only understand the problems that we might wish to solve (and design our sensors accordingly), but also look at how our sensors integrate with the wider technologies used by our customers in general.