This little robot could have big implications for autonomous mapping in archaeology and beyond.

A big reason to use remote-controlled robotic scanning solutions is safety. They can scan many areas that can’t be reached with traditional systems due to mold, airborne chemicals, or structures that have lost their integrity. Think of these robots as the land-borne siblings of the UAVs that people deploy to perform dirty, dull, and dangerous tasks. If they can work with only a little human input, all the better.

The area that the ROVINA project wants to scan is more of a problem than most. The story goes that the project founders started working together when they had the idea of using robots to explore the catacombs of Rome–an environment so structurally unsound and thick with radioactive radon gas that most of it still remains unexplored. It’s also full of challenges like poor lighting, steep slopes, and debris, just like you’d expect from underground cave systems dating back to 2 AD.

The robotic platform that ROVINA developed for this task is, as you might guess, impressive. It’s a track robot, meaning it has treads like a tank. It can carry payloads of over 50k, climb stairs, navigate over obstacles, and operate in all weather conditions. They’ve mounted it with cameras, 3D laser scanners, gyroscopes, accelerometers, and a magnetometer.

Like Sanborne’s SPIN (Sanborn Platform for INdoor mapping), and a few other semi-autonomous systems, ROVINA’s system draws information from its sensors to do more than create 2D and 3D maps. It analyzes that sensor data using computer vision techniques to help the robot sense obstacles, navigate difficult areas, and decide its own mapping itinerary autonomously. 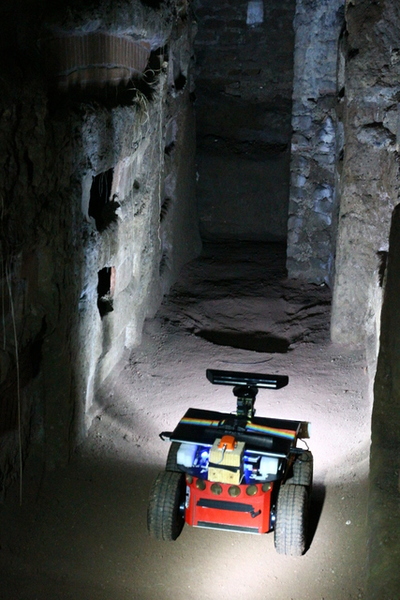 However, the methods that most robotic solutions use for navigation wouldn’t work for ROVINA. Most robots start with no previous understanding of their environment and develop a map as they scan along. They are programmed to recognize the frontiers of the area they’ve already explored and move to work on the nearest place where the scan ends. In an area as complex as the catacombs, this method causes robots to get themselves literally lost. Imagine a sensor package costing many tens of thousands of dollars (or more) strapped to a robot that can’t figure out how to get home. It’s not ideal.

ROVINA has a clever solution. It has been programmed to predict the way that the tunnels are structured before even entering them. To do this, it searches for similarities between the environment its sensors “see” and all the environments that it has recorded in the past. Next, it makes predictions to decide where it will go, just like humans do when we’re exploring someplace we’ve never been before. This approach takes into account the likelihood that the robot doesn’t know where it is, and works to correct for that.

This approach takes longer than the frontier approach, but in experiments it has also produced complete models rather than getting lost and giving up.

At the moment, the platform needs to be manually controlled most of the time, but the solution outlined above should go a long way toward making it fully autonomous. One of the team members told Forbes that “we want to have really autonomous operations, where we just bring the platform there, press the start button, and then the platform goes away and comes back after a couple of hours with the model.”

But that’s not even the most interesting thing this team has planned for its robot. Much like ARIA, another project trying to automate inspection, ROVINA is working on a whole range of inspection problems at once.

For one, their novel method of exploration is helping them to develop systems that analyze and annotate the environment automatically. This could, for instance, help the robot decide the safest route for it to take through a difficult space, or help it identify archaeologically interesting artifacts. They are also working on an interface that would allow users to select different levels of autonomy for the robot, depending on their project requirements. Lastly, they are creating tools that compare and analyze an environment to identify variations over time. 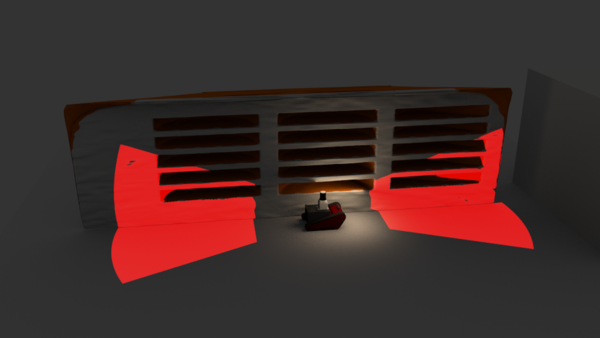 The idea, and one that I think would be enticing well outside of the realm of archaeology, is that you can send your robot off to scan a space at regular intervals. It can scan environments that are dangerous and complex, whether to gather data for the first time or to measure how it has changed from previous models. It’s a pretty powerful idea.

Perhaps the greatest thing about this project, though, is that the team sees it as more than a chance to make cave-exploring robots. Their plan is to make all their software open source, in order to allow others to build their own mapping robots using the same technologies. ROVINA, then, may be a “stepping sone on the path towards fully autonomous agents that reliably perceive and act in their environments.” And that’s something I think a lot of people could use.

Intel is Betting Computer Vision is Key to 3D's Future