This week, I’m going to finish my coverage of the CanBIM meeting (see part one here) by featuring an exhibitor that was much buzzed about. Why? Because they’re bringing 3D technology to a mainstream market in just the right way.

Magic
The most widely discussed exhibitor at the meeting was ThinAiR Technologies from Abbotsford, BC. As a spin-off from their core business providing 3D computer renderings, they have found a way to bring augmented reality to the general public.

The company has designed a new mechanism for enabling a condominium real estate agent to market their new properties. Rather than presenting to potential purchasers in traditional traditional manner, with brochures containing artist’s impressions of the new condo units; the condo agent is able to take advantage of the smartphone technologies that many of their customer would have had in their pockets. 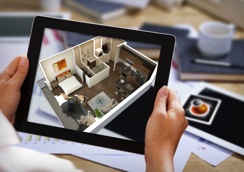 Renderings of real-estate offerings enable a much more immersive view than brochures.

Potential buyers are provided with a target image on a coaster or in a brochure. They hold this image under the camera of a smartphone, tablet or computer to view a 3D rendering of the property on the screen. Presenting the new units in the manner not only provided much more interaction that enabled potential customers to gain a better feel for the units that they were looking to purchase, it also meant that potential customers stayed longer in the sales room. The result was that 300 condos were sold on the first day, far outstripping the sales of a competitor selling units in an identical development across the street.

I was pleased to see such a positive outcome from applying technology in the mainstream in this manner, since it reminded me of projects that colleagues were undertaking in the Innovation Labs during my time at Ordnance Survey (see here for more details).  While the use of augmented reality in the context of real estate sales could potentially be considered as a marketing gimmick, it provided real results and highlighted how the 3D information that we acquire will always be of most value if it is most accessible to its target market.