Hands on with Bluebeam Revu, Pt. 1

Most every business nowadays (and everyone in the AEC space) rely upon PDFs for communication and reporting throughout the lifecycle of projects. PDFs are near ubiquitous and often interacted with via free PDF viewers, but those of us that go a bit deeper usually have Acrobat Pro. This week I dove into another option for mastering PDFs, Bluebeam Revu.

While most of us associate PDFs with Adobe, the reality is that the PDF is an ISO standard and open for any company to use as a format. What Bluebeam has done is start with most all of the tools available in Acrobat Pro and add a lot more functionality. So much, in fact that I decided to break the review into two posts. This post will cover the most interesting tools in Revu Extreme while I will cover Bluebeam Studio, their cloud based document management system, next week. There is no way to cover everything Revu will do in this format so feel free to ask if there are particular features that you are curious about. Think of this as a quick overview that hits the points that I think are most applicable to those of us in laser scanning and 3D imaging.

Essentially, there are a few different version of Revu:

For the purposes of my testing I used Revu Extreme.

With the growth of BIM, more and more projects begin with a an RFP that includes building schematics (such as they are) in the form of a PDF. Scanning service providers are supposed to use these to produce a bid for capturing a model. Traditionally, I used stamps in Acrobat Pro to mark scan positions and add markups to help inform my field personnel. I found Revu to aid greatly in this process. First of all, you can scale the drawings in PDF from a single known measurement. Additionally, users can create sub-selected areas (viewports) with differing scales on the same drawing. Once the scale has been established users can work (and customize) auto-measuring tools that do things like automatically calculate the area inside of a markup shape. 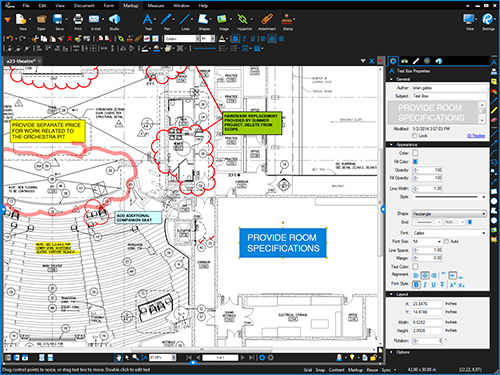 Counting things becomes much easier as well with the item mark and visual search tools. If you make your scan position icon a count markup then the application automatically tallies all of the scan positions in the PDF. Visual search tools are available and a great way to count drawn objects in the PDF. You simply draw a rectangle around the object (toilet, door, etc.) and Revu will search the entire file and tell you how many toilets or doors are in the building.

One of the best things about Revu is that it records every action taken to a table in the Markup tab at the bottom of the screen. So not only is there a record of who did what and when, but each record is a hyperlink that takes you straight to the markup in the PDF. Most impressively, this table works like a lite version of Excel. Users can sort, filter, add custom columns and best of all add formulae. Add that to the measurement tools mentioned above and you can produce cost calculations in real time.

Another very clever tool is the Comparison tool. Using this tool you can load two versions of a PDF and automatically find all of the differences between the two. Revu creates a new layer that shows everything that is different between the two PDF in contrasting colors. One of the more impressive pieces of this tool is that it can account for differences in scale between the two PDFs and will even correct for offsets if one of the PDFs is scanned from paper and was skewed upon importation. I started using it to monitor modeling progress by using Revit to produce daily section views of ongoing modeling projects. By comparing each day’s section I can immediately see everything added to the model over the previous 24 hours. The entire process takes less than five minutes!

All told, I am quite impressed with the increased functionality Revu affords its users. All tools can be saved and bundled into tool sets that can be exported/imported so that everyone in a firm or on a project team can use standardized nomenclature. The pricing is reasonable ($230 – 370 USD per seat, depending upon which version you get) and they use the old (and sorely missed) “you buy it, you own it” licensing model as opposed to subscriptions. Bluebeam offers a free 30 day trial if you want to take a look.

Next week I will cover Bluebeam Studio, a light document management system and cloud based collaboration tool that is included with all paid versions of Revu.

Hands on with Bluebeam Revu, Pt. 2