I Used the Hologram Room (And Loved It)

It seems easy to make fancy demonstration videos that show an amazing virtual reality experience. It’s much harder to make that world feel convincing in the field, on the spot. This is a long way of explaining why I was skeptical of Euclideon’s hologram room at SPAR International 2015–until I stepped in.

(A note: I’d love to include photographs, but cameras and recorders were prohibited inside the room. You’ll have to settle for the promotional shots, which are a pretty good representation of the room, despite what I’ve said above.)

First, the Euclideon rep told me to put on a pair of special glasses and stand in the front third of the room, where they had projected a digital grid with floating icons, each representing a different menu option. He selected a Black Hawk cockpit simulation and then, just that quickly, I was in the cockpit of a Black Hawk.

Not that it looked totally real. To their credit, Euclideon pointed this out: a woman’s disembodied voice explained that the resolution quality was lower than we would see in the final product, and that the scene had been rendered for demonstration purposes. The whole view had a mid-fi sheen to it that betrayed it as a digital representation.

In spite of that, it felt real because the objects in cockpit behaved in space like real objects would. As I stepped a few feet to the side, my view of the cockpit changed accordingly. The parallax was perfect. So much so that I was hesitant to step forward because I felt that I was going to bump into the back of the pilot’s seat, even though it looked like a seat from a Nintendo game. “Put your hand out and touch it,” the rep joked. I reached my hand out slowly and actually felt a bit of surprise when I got nothing but air.

He told me to look out the windows, and I did. As I moved to change my point of view, I saw different parts of the scene outside. 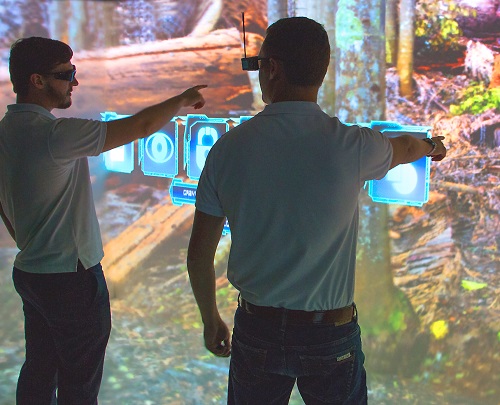 Next, the rep put me inside a 3D scan of an oil rig. The sense of actually being there didn’t change–when he flipped the scene from the ground level to the top of a staircase, I briefly felt like I was about to lose my balance. I cautiously walked up to the edge of a staircase and looked over. I worried that I looked ridiculous for reacting so sheepishly, but I was deeply impressed that Euclideon had managed the illusion.

The most impressive part: the rep put me inside the last scene, a giant city model at a high altitude that made me feel like Godzilla–I could see the ocean in the distance and an expanse of buildings and parks in front of me. Quickly, the rep brought my point of view down to street level and handed me a controller. Point in a direction and click a button on the remote, he explained, and I would fly in that direction. Pretty soon I was zipping through the point cloud, dodging trees and houses, skimming over the tops of hills. For a projection that was clearly a 3D scan, it all felt pretty real and exhilarating.

I left the hologram room deeply impressed by my ten-minute demonstration. It felt extremely useful as a way to make 3D-imaging data feel more immediate to an audience. What better way to show someone a space that you captured with a laser scanner than to put them inside it?