We’ve seen a significant amount of writing already about how augmented reality can help bring 3D from the design stage into the operations space. DAQRI’s CEO Andy Lowery knows this, so he used his keynote time to discuss an epic technological change that is right around the corner–and the immense benefits that its going to bring to your business. “I’m not going to talk about DAQRI per se,” Lowery explained, “I’m going to contextualize elements of what our products, and the products from other people at the SPAR conference, and what they all fit into. We’re really on the cusp of something a lot bigger than what DAQRI has to offer.”

A Big Change
Lowery laid some groundwork before his big reveal. He told a story how, after a presentation in Silicon Valley arguing that augmented reality is currently better suited for the industrial framework than consumers, he was approached by Philip Zelikow. Zelikow, a famous historian who was also the executive director of the 9/11 Commission, “said that I had no idea the implications of what I was talking about.”

The change Zelikow saw in the offing as a result of augmented reality paralleled the industrial space’s change from the steam engine to electricity. He talked about the invention of the steam engine in the 1800’s, and the building up of factories around those engines. In the absence of electricity, as Lowery put it, “people with high skills, who could work on powered machinery, would cluster around this centralized steam engine to do their work. Then they had non-skilled laborers around the outskirts of the factory that would do less skilled labor.”

With electricity, factories were able to distribute power around the whole floor. “Now every factory worker could be a skilled professional that could work with power tools and things like that.” The change brought a renaissance–now that everyone could be a skilled worker, everyone had to have a basic skill set, including the ability to read and write. “What it led to was the advent of high school education. Mandatory high school education came about as a result of this new distribution of power.”

The revolution that we are at the front of today, Lowery explained “is distribution of information.” The parallel is that our factories and facilities currently have a very centralized information system, much as the steam engine operated as a centralized power system. “You have a centralized control area–a control panel, a control station, a control room–that all the information is networked and fed into, whether by logs or instrumented machines or whatnot.” It becomes a hub where decisions are made and then redistributed to people out in the field.”

Augmented reality, like DAQRI’s Smart Helmet, allows a facility to distribute that information to everyone. The technology allows facilities to “skip the control room and distribute the information, and even distribute the ability to control the machines, or make decisions in a more distributed way.”

What does it give rise to? Zelicow explains that it gives rise to the potential invention of a new class of worker. “He talked about it from the framework of needing to educate these people differently, perhaps create a whole new school architecture that isn’t college, isn’t high school but it’s something in-between.”

Imagine an EMT, Lowery said, who is with a patient that has a disorder she’s never come across. “Imagine being able to pipe in an expert on the spot who is sitting maybe a hundred miles away that can look at that individual, pull the camera data back, diagnose the problem, and instruct the EMT that previously didn’t have that data on how to give that person a service.”

So What?
The power for the industrial sector, he argued, would be great, including higher efficiency, safety enhancements, and so on. 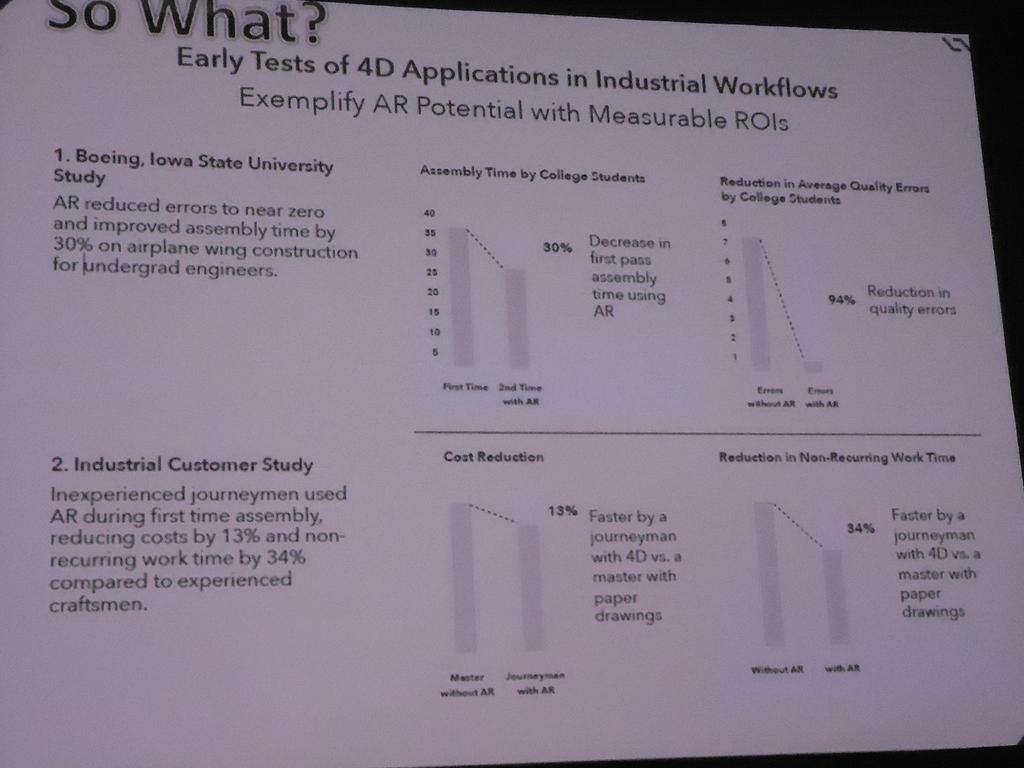 As proof, he offered an Iowa State and Boeing study where they constructed an aircraft wing with multiple sets of 50 undergrad students. One set had the information on a computer, a centralized repository of information as Lowery had outlined before. Another set had tablets that had augmented reality work instructions. “Those are 3D models that already exist for the wing,” Lowery said. “The models would actually animate and say, okay, here’s the next step.”

The desktop group performed the work in about 45 minutes. The augmented reality group performed the work about 30% faster. “But the absolutely remarkable statistic, the one that we should be focused on right now,” Lowery said, “is the virtual elimination of human error.” The average number of errors for those using desktop instructions was seven a piece. The first time the students using AR ever built an aircraft wing, they averaged one half of an error each.

“The second time they built that aircraft wing,” Lowery said, “not a single student made a single error.” It seems that this new class of worker is something even more exciting than we had realized.

Fectar provides a CMS for AR and VR in the cloud

Fectar provides a CMS for AR and VR in the cloud

Four Facts about the Current State of AR for Enterprise

Augmented Reality isn't Ready for Commercial Use... Yet