I have to admit that I have been hearing about virtual reality for more than two decades and for the most part, it has been a disappointment. Its appeal has been that it is a “cool” technology as opposed to a practical one.

That is not to say that I don’t see the benefit of these systems. There are many areas where virtual reality can play a very important part for simulation and training. However, an important point for me in any technology is accessibility, or putting the technology to work in the hands of as many people as possible. Part of the reason I’ve been disappointed with virtual reality has been because these systems are inaccessible.

That might soon change. A few years ago a project was initiated in The Netherlands through a consortium of Dutch organizations including the Netherlands Forensic Institute (NFI). This project combined many different scanning and 3D technologies to produce wearable devices like head-mounted 3D scanners, video cameras, and other telemetry devices that could be used to digitalize and visualize the crime scene. The main intent of this effort was to look at ways to quickly document and preserve a crime scene.

Right from the website:
“This ‘freezing’ of the crime scene provides great opportunities for reconstruction and testing hypotheses or witness statements. But it is also very useful for education, for training forensic researchers or for experimenting with new methods and techniques. Within the project, a virtual reality environment called the CSI Lab was developed, a lab in which human behaviour at the crime scene can be monitored and analysed on a scientific basis for training purposes.”

Other important benefits include providing investigators a chance to do their analysis in a virtual environment that reflects the real crime scene as best as possible. Investigators can perform shooting reconstructions, bloodstain pattern analysis, and even suspect height analysis all while being immersed in a virtual scene.

Of course, why not extend this benefit to the judge and jury? Crime scenes can be complex and difficult to imagine, and it is not uncommon to have the judge and jury visit a crime scene as part of a trial.  Using a virtual environment, it is possible to bring the crime scene to the jury so that they can experience a first-hand view of the scene. A scene can be presented on standard PC monitors, or it is also possible to immerse the jury in a virtual reality environment by projecting on a 3D screen.

In July of 2014 at the International Police Training Workshop in Neuss, Germany, I had the opportunity to see a scaled-down version of “The Cave,” an immersive virtual reality environment presented by Uwe Woessner from the University of Stuttgart. One of the highlights of this setup was how practical and easy it is for small groups of 10 people or so to fit inside and view a virtual crime. They can, for instance, view the scene of a shooting plus complete landscapes, MRIs, and even the inside of large water pipes.

Included in his setup was a small “light table” that offered a plan view map of the projected 3D scene.  Small Lego-type characters were placed on the light table in a specific part of the map and would show up in the scene in the corresponding location. When you moved the character on the table, the position in the virtual environment would update, which was really great for running different shooter position scenarios.

After thinking about the possibilities, I provided Uwe Woessner with a couple of data sets. One was a point cloud from the University of Toronto’s Crime House, where students practice a number of forensic related activities.  The first images I was sent back had me thinking that he could have easily been standing there in real life. 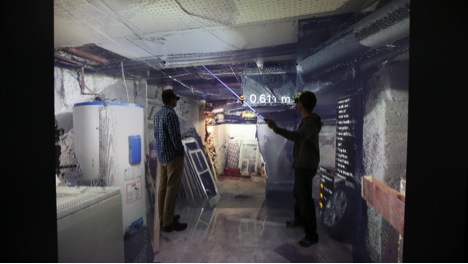 The second set of data that I provided was from a laser scan and analysis that I had done at the Ontario Police College’s Math & Physics course in 2014 in Aylmer, Ontario.  This was a series of 4 bloodstain impacts that were created and analyzed in FARO Scene. The results were exported and sent via the internet. It was interesting how easily Uwe was able to manipulate the data inside of the virtual environment. Not only was he at the “scene,” but he was also able to look at the results of the analysis, take measurements and check to see if anything was inconsistent. Have a look at the video.

In thinking of the possibilities, I am starting to warm up to the idea of a virtual crime scene in forensic investigations. The benefits of being able to look at different perspectives, conduct or run different scenarios, or visualize all the data collected at the scene are clear. Being immersed in the results of a bloodstain pattern analysis or shooting reconstruction has plenty of merit for both investigators and the triers of fact. And yes, it is cool…guilty as charged!