Underground 3D utility mapping: A vision for the future

This blog posts continues last week’s exploration of underground utility mapping, and why it’s important. This week, we look into the present state-of-the-art technology for detecting underground utilities, and talk to Leica Geosystems for a vision of the future.

The industry standard tools are electromagnetic (EML) detection wands (for example, the Leica DIGiSYSTEM and Leica ULTRA) that can be combined with a signal generator to detect conductive pipes and cables. These wands use several frequencies to detect shallow and deep infrastructure, but they are basically 2D locators. They are effective and simple to use for detecting underground infrastructure as long as it is accessible and conductive (so as to be able to induce a signal in the pipe or cable). 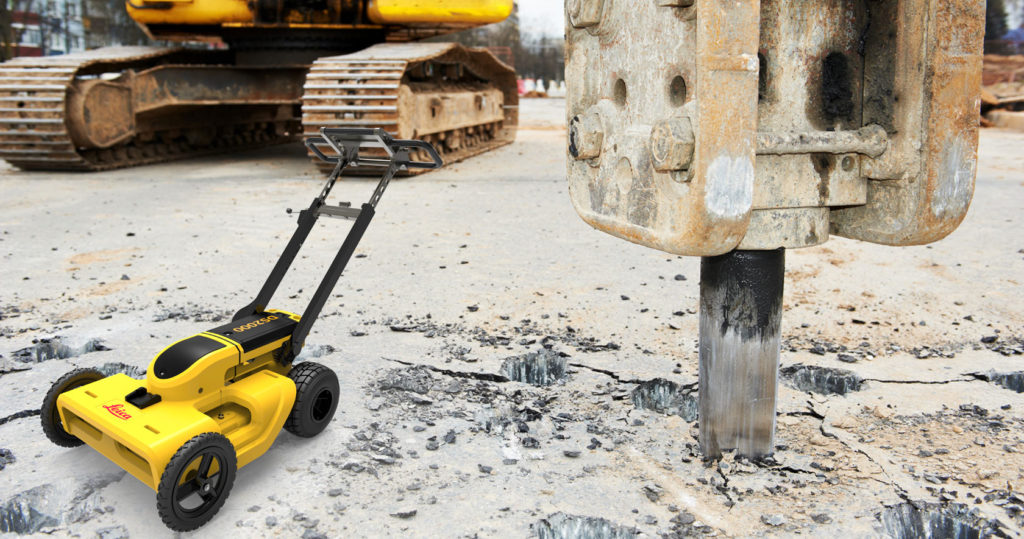 GPR devices (for example, the Leica DS2000) can detect not only nonmetallic objects, but also provide 3D location (reporting depth as well as X,Y location). This makes GPR a superior mapping technology to EML wands. When combined with GNSS locators, GPR can accurately determine the geolocation of underground infrastructure in 3D. The use of GPR has become almost mandatory in the water industry, which is increasing its use of plastic piping. (Though GPR is not particularly good at detecting the plastic pipe itself, it detects the contents of the pipe such as water.)

But GPR does have drawbacks. The most important is that it requires an expert, typically a trained geophysicist, to interpret the scans. Second, current devices are intended to operate at a walking pace, making GPR inefficient compared to mobile laser scanning, for example. In addition, identifying the type of utility (water, electric, fiber optic) generally requires supplementary information from other sources. In some soil types such as aggregate and clay GPR does not perform well.

Leica Geosystems and IDS (Ingegneria dei Sistemi) have worked together on GPR for years. Since acquiring IDS’ GeoRadar division two years ago, Hexagon has announced a major technology, the towable Pegasus: Stream array. Designed to be towed by a vehicle at speeds up to 15 km/hr (though 5-10 km/hr are more typical), the device provides simultaneous above and below-ground 3D scanning. It includes a mobile laser scanner with laser scanners, optical cameras and GNSS receivers (Leica Pegasus: Two) for above-ground features and a Stream EM GPR array for below-ground objects.

This was a major technology announcement at the 2016 HxGNLive event. There, I had the opportunity to briefly chat with Stuart Woods, Leica Geosystems Vice-President of Mobile Mapping, who made it clear that Leica Geosystems sees a major opportunity in underground utility detection and that the GeoRadar investment would be followed by more significant investments in underground mapping technology.

A vision of the future for underground utility mapping

Recently in Heerbrugg, Switzerland I had the opportunity to chat with Katherine Broder, president of the construction tools division at Leica Geosystems. We spoke about Leica Geosystems’ vision for the future advancement of underground mapping hardware and software.

Broder said that Leica Geosystems’ current focus is on the expert market. The immediate goal is to bring positioning and underground detection tools together to provide accurate location for underground infrastructure. The customers for this technology tend to be high-end, like utilities, DoTs, MoTs, and government mapping agencies, but Leica also intends to democratize this technology to the broader professional market by making the technology more accessible.

In addition to bringing detection, positioning, and data sharing together with “one button” simplicity, Leica’s longer term goal is to tie them together with vertical applications such as machine control for automated construction. Hexagon’s focus on cross-discipline integration is an important driver for this integration for vertical industries.

Currently, the biggest constraint limiting GPR market penetration is the difficulty of interpreting GPR scans, since a trained geophysicist is essential to the process. To make it possible for non-expert professionals to use GPR, Leica Geosystems has just announced DX Office Vision Utility Post Processing software. This enables users with minimal training to extract pipes and other infrastructure from GPR data into a CAD drawing. In addition, it supports overlaying EML scans beginning to enable multi-sensor analysis.

Hexagon’s IDS GeoRadar division has also just introduced the Stream C, a compact GPR array solution for real-time 3D mapping of underground utilities. This solution comes equipped with software for automatically mapping underground infrastructure. A massive antenna array with two polarizations provides an increased level of accuracy, and together with software for tracing signals across multiple scans, the system automatically detects and locates the position of pipes in real time and displays them on screen. The system can be towed manually or with a small vehicle, increasing the acquisition speed up to 6 km/h.

Another major software initiative is looking to enable real-time collaboration between field staff and the office so that above and below surveying can occur simultaneously. Leica DX Manager provides a single dashboard for users of underground detection systems like the DS2000, GIS collectors, and GNSS positioning systems to manage spatial data, tasks, and field teams. The platform allows users to locate, map and share subsurface utility information simultaneously. For example, DS2000 users can integrate location data including depth measurements with GNSS measurements. This makes it possible to have field operators with limited training and experience to collect data that is viewed and interpreted in real-time by geophysical experts in the office. 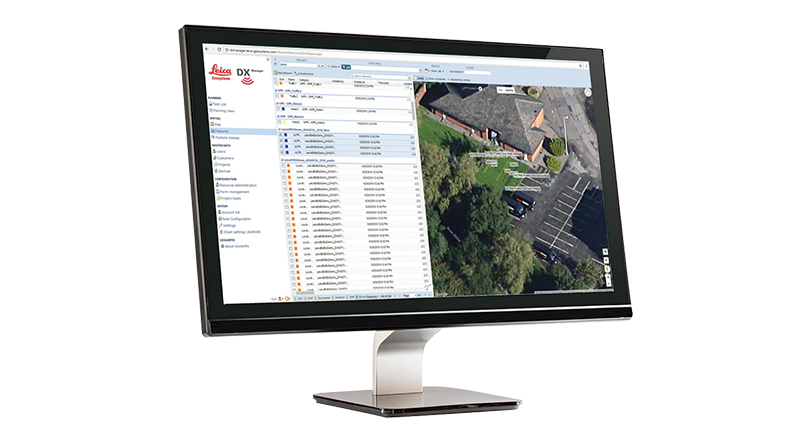 A related opportunity is to enable condition assessment simultaneously with below and above ground survey.  This involves integrating other technologies and is analogous to multi-sensor scanners such as the Pegasus: Two and the Pegasus Backpack, which include laser scanners, photo cameras, and IR cameras. Location and condition data would be very helpful to utilities in prioritizing their maintenance work.

Broder said that Leica Geosystems sees a major opportunity in managing and sharing documentation about underground infrastructure. Right now there is vast duplication of detection because each utility and communications company does its own scanning and potholing and the data collected is rarely shared. Leica Geosystems is investigating the market opportunity for software tools that provide a way of sharing this information about underground utilities.

According to Broder, the largest market for underground detection is the United States. The European market–outside of the Netherlands and the U.K.–tends to be conservative. In Europe, each utility does its own maintenance and there is little coordination among utilities and communications companies to minimize traffic disruption. The result is that the same stretch of road can be dug up multiple times—inconveniencing the public each time.

To date, infrastructure maintenance in Europe hasn’t invested in technology. Underground detection is basically limited to potholing, which is a hugely expensive way of locating underground infrastructure. Broder estimates the cost of a single pothole, including indirect costs such as traffic disruption, is roughly $30,000. She believes the potential for technology in Europe is huge –that is, once the cost to the economy of current practices is realized, and GPR and other technologies have begun to penetrate the utility and telecommunications infrastructure maintenance market.

Not a tech problem

The technology is already there—the challenge is organizational. Should a government agency have this responsibility, as is already the case in several cities around the world or could a commercial company collect the data and charge for sharing it?

An innovative pilot in Chicago led by City Digital, Cityzenith, Accenture, HBK Engineering, and the City of Chicago uses a mapping platform that collects digital images of open excavations, extracts 3D information from them and shares that information. When local engineering firms and utilities excavate in streets or sidewalks, workers take a digital photo of the visible pipes and wires exposed by the excavation. The images are then scanned into the mapping platform, which extracts key data points from it: location, depth, and diameter of the pipes and other attributes of the infrastructure in the photo. The collected 3-D infrastructure data can then be searched geographically and displayed over a digital map of Chicago’s streets.

Remote sensing technologies such as electomagnetic (EML) and ground penetrating radar (GPR) have been available for decades, but partly because of the difficulty of using these technologies for non-experts, potholing remains the default method of geolocating underground facilities in many parts of the world. There are signs that this is changing.  A significant investment in underground detection, positioning, and documentation management is being made by a major survey equipment vendor. This has already resulted in advances in processing software that have begun to make GPR accessible to the non-expert market.

In addition, a major new standards initiative is underway by the OGC to enable improved information management, sharing and collaboration for underground municipal infrastructure. An innovative pilot in Chicago tested technology for the low cost acquisition and sharing of information about underground infrastructure including location. And there are signs that the service sector is beginning to realize significant business opportunities in underground utility mapping – at the last GeoBusiness conference in London, there were at least five or six companies offering underground utility detection and mapping services.

Why mapping and sharing underground information is a must