Part of knowing where we are going is knowing where we’ve been. This is the belief that makes historic preservation so important. As a human race, it’s important to preserve the buildings, structures, and objects that came before us to not only study the past, but also to reflect on human life, beliefs, and conditions and how they have changed. This was the case for the Cathedral of Florence’s Baptistery, which in 2016 began a project to replace and restore the original 14th century bronze doors on the south side of the building.

“We were honored to participate in this multi-stage project, as it carried a profound level of significance for the citizens of Florence and all of Italy” -Andrea Barchi, Prototek COO

When Italian goldsmith, sculptor, and architect Andrea Pisano put the finishing touches on the ornate bronze doors he created for the Cathedral of Florence’s Baptistery in 1336, only twelve years remained until the Black Death would strike Italy from the sea and begin its devastating march across Europe. The population of Florence wouldn’t fully recover for another 500 years. But in the decades prior, there was much for the local citizens, artists, and merchants to celebrate.

Dante and several other well-known Renaissance figures had been baptized in the cathedral’s baptistery, said to have been first erected in the late fourth or early fifth century AD. However, it wasn’t until the year 1329 that Florence’s powerful and influential Cloth Merchants Guild, responsible for taking care of the baptistery, decided to replace the existing wooden door with bronze doors.

When Pisano finally unveiled the towering cast bronze doors, they quickly became the pride of Florence. Their 28 intricately carved relief panels, with various geometric patterns and shapes as well as 20 scenes from the life of John the Baptist, captivated the imagination of countless citizens and religious pilgrims. Yet, in the 680 years since the massive, 8-ton doors were first erected, they had suffered significant deterioration due to weather and pollution. Over the centuries, a buildup of unstable salts was slowly eating away at the bronze, destroying the very artwork itself.

As part of a cultural preservation project sponsored by the Opera di Santa Maria del Fiore, it was decided to replace Pisano’s doors with exact replicas. The baptistery’s other two sets of doors, those for the east and north sides of the building, had been replaced years earlier. Now all that remained were Pisano’s original bronze doors. For accomplishing this endeavor, the Opera partnered with the Frilli Gallery, a leading Florence art studio famous across Italy, and around the world, for its impeccable standards of artistic mastery. From beginning to end, the Frilli Gallery fastidiously coordinated the efforts of dozens of skilled specialists.

What proved to be a challenge from the start was the lack of molds and casts for the doors. While the east and north doors had plaster casts – which made it possible for duplicates to be made – Pisano’s south doors did not. Considering the complex surfaces of the doors and artwork, and the need to recreate them as perfectly as possible, the restoration team decided to use 3D scanning for the project, which could create highly accurate digital models that capture detail down to a one hundredth of a millimeter. Compared to traditional casting methods that heavily involve contact with the doors, during the 3D scanning process, the only thing touching the delicate artifacts were photons.

After careful research on qualified firms capable of handling such a project of immense cultural importance, Prototek, a 3D scanning/printing service provider in Valenza, Italy, was chosen. With years of experience in digital capture, 3D design, and 3D production services, Prototek didn’t hesitate when they were asked to take part in this high-profile cultural preservation project.

“We were honored to participate in this multi-stage project, as it carried a profound level of significance for the citizens of Florence and all of Italy,” said Andrea Barchi, Prototek COO. “The degree of results we achieved, now visible to anyone walking by the new doors, attest to the quality of our work, and this is something we’re ready to offer any client, regardless of project size or complexity.”

Following the careful removal of the two giant doors (16.2 feet tall by 9.6 feet wide and weighing around 8 tons) from the baptistery, they were meticulously, yet gently, attended to by master restorers, repairing the damage and removing the oxidation that had built up through the centuries. As the restorers continued their work on the doors, the original gilding and magnificent details of Pisano’s artistry began to emerge. 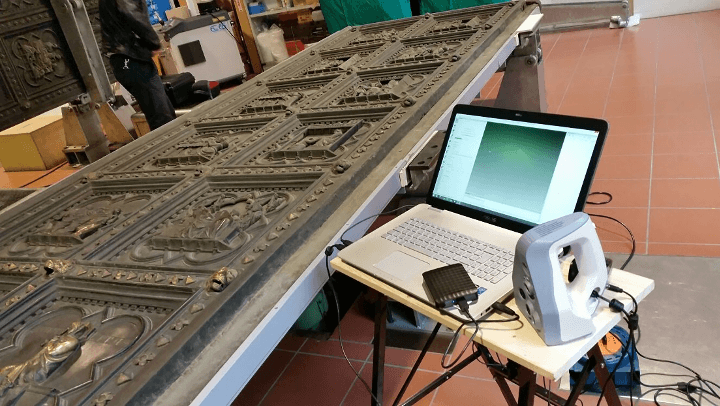 “The Artec Spider is a 3D scanner par excellence, one we’ve relied upon many times for our most crucial scanning jobs that demand the highest levels of precision and extremely lifelike digital capture,” said Barchi. “It’s so comfortable for us to use, with the results displayed in real time on the laptop screen. The Spider is so advanced that we could reverse engineer practically any small object with it, anything from a priceless cloisonné vase from the early Qing dynasty, all the way to small-scale turbofan components for a Rolls Royce Trent 500 engine, and countless objects in between.”

From start to finish, the 3D scanning part of the 3-year long project took just 10 days. During that time, all 28 of Pisano’s original panels were digitally captured in high-resolution color and transformed into breathtaking 3D models.

Barchi noted that while they have used other 3D scanners that require a stand or tripod for them to scan, the Space Spider is lightweight and handheld, enabling their technician to comfortably maneuver around each panel and capture it quickly and easily. The scanner’s clean scans, plus its speed of capture, kept the file size and post-processing times down to a minimum.

Following the scanning, the scans from Spider were processed in Artec Studio. The scanning technician post-processed the scans in Artec Studio software, deleting any unwanted data, aligning and registering the scans, and finally exporting them as 3D models ready for ZBrush as well as Meshmixer, which was used for working more closely with the panels’ intricate details and complex geometries. They also used ZBrush to rebuild some missing details in a few of the panels. 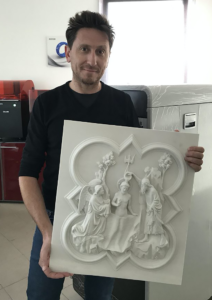 The 3D models were then sent for 3D printing as 500mm x 500mm positive panels in PA12 on a 3D Systems sPro 230 SLS (Selective Laser Sintering) printer. After the panels were ready, they were sent to the Ciglia & Carrai Artistic Foundry, which created negative silicone molds from the positive panels. These negative molds were then used for casting the final bronze replicas via lost wax casting. Once the casts had been poured and then fully cooled, Ciglia & Carrai’s artists and craftsmen went to work, gently refining and polishing the anatomical details, hands, feet, clothes and other elements, faithfully bringing back to life all the lines and shapes and curves of Pisano’s original creation.

Following the finishing, a final process was required, where acids were carefully poured across the surface of each bronze panel to naturally oxidize the metal and bring about an aged and authentic appearance to the masterpiece. Once the panels were ready, it took one month before all the elements of the doors were assembled, ultimately achieving the final spectacular results. 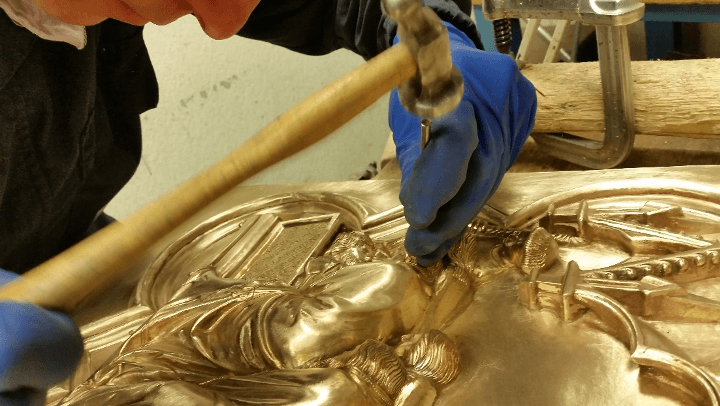 Details in the casting. (Photo provided by Andrea Barchi, Prototek)

At the installation ceremony, Florence’s citizens and visitors alike looked on in admiration and wonder at Pisano’s 14th century wonder reborn in the most elegant and exact way, thanks to 21st century technologies and the brilliant work of specialists at Prototek and Ciglia & Carrai.

Today, the doors have been restored to their original location: on the south side of the Cathedral of Florence’s Baptistery, where they will no doubt be gazed upon with admiration and curiosity for generations to come.

Never before has technology been able to so fully meet the needs of museums and historical societies to help rescue our most precious historical artifacts and monuments. Across the world, so many priceless creations are falling into disrepair or even worse. But with 3D scanning, these remarkable inheritances can be digitally captured and brought back to life for people to enjoy for generations to come. If humans can protect what they have learned from the past, we can help create a beautiful path for moving into the future.