There are two categories of geoid models provided by NGS. One category is known as composite, or hybrid, geoid models. GEOID96 was NGS’s first hybrid geoid model and the subsequent models up to and including the current GEOID12B are hybrid models. Hybrid models are created and biased so users with GPS/GNSS measurement and the model can compute heights in the current official vertical datum, NAVD 88 for the conterminous United States currently.

The hybrid and the gravimetric models differ. USGG2012 is defined entirely by gravity. GEOID12B cannot be, it is constrained to NAVD88 and the errors accumulated in its realization. One aspect of that constraint is the zero point at Father Point/Rimouski which was primarily chosen to lessen map recompilation efforts.

Now that GRACE satellite data is available for comparison it turns out that NAVD88 zero surface is on average ~1.6 ft., ~50 cm, above the best gravimetric geoid as shown in Figure 1.   Therefore, it follows that the difference between an orthometric height derived from the most up-to-date gravimetric geoid and a NAVD 88 orthometric height is ~1.6 ft., ~50 cm.

The comparison also reveals that the NAVD88 zero surface is tilted across the conterminous United States. The values in Figure 2 are calculated by finding the difference between GRACE derived geoid heights, NAVD88 orthometric heights and GPS/GNSS derived ellipsoidal heights at positions. [i]

If the three values were correlated the results of the calculations would be zero. They are not. There are residuals, shown in Figure 2, which illustrate the extent of the trend of the tilt between the GRACE geoid and the NAVD88 zero elevation reference surface. The difference varies from +0.52 ft., +16cm in Florida to -3.6 ft., -1.12m in the Pacific Northwest. The same process reveals a tilt of up to ~6.6 ft., ~2m across Alaska. 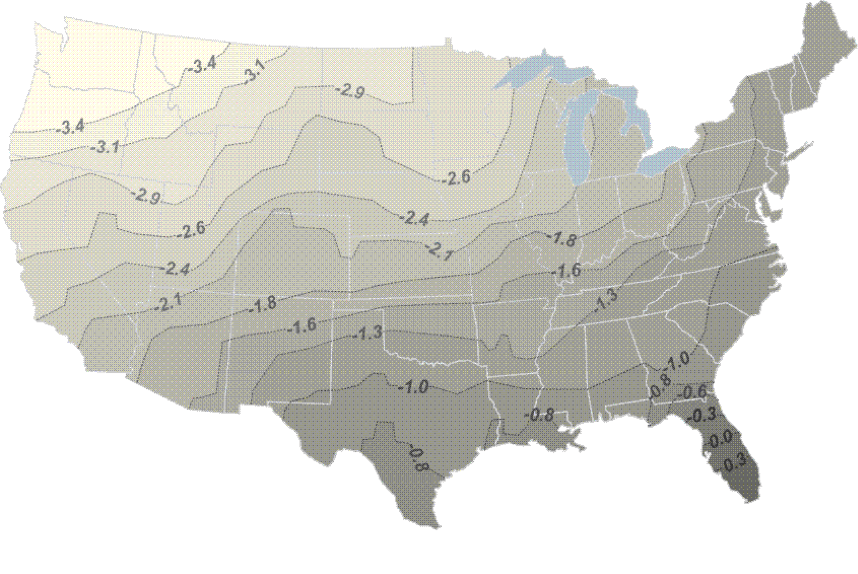 Also, the centers of the hybrid and the gravimetric models differ. The hybrid GEOID12B is the geoid reference for NAD 83 the GRS80 reference ellipsoid used for NAD83 is not geocentric. The gravimetric USGG2012 geoid refers to the ITRF/IGS. ITRF/IGS uses the GRS80 ellipsoid too. However, in those reference frames it is oriented to the geocenter. A comparison between the NAD83 and the ITRF/IGS centers revealed a difference of approximately ~7 ft., ~2.2m. As shown in Figure 3 that shift contributes to the difference in the heights from the two frames. 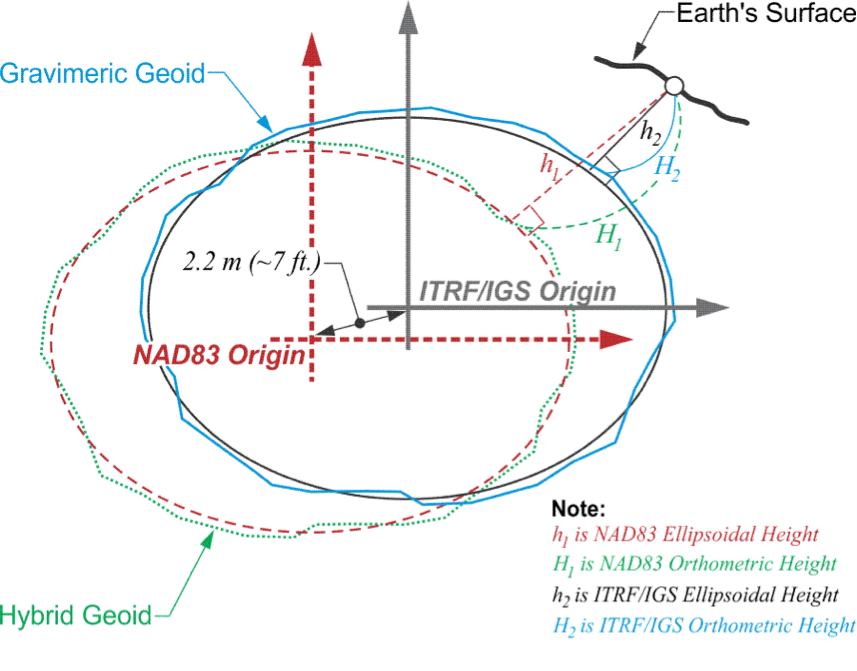 It is definitely not appropriate to use USGG2012 to convert between the NAD 83 ellipsoid heights and NAVD 88 orthometric heights. On the other hand, GEOID 12B is designed for that purpose exactly.

Technological advances, GPS/GNSS, GRACE, GOCE and others have systematically improved measurement since NAVD88 was rolled out many years ago. The subsequent measurements have revealed inadequacies in the official vertical datum which have led to plans to replace NAVD88 with a new geopotential reference frame by 2022. The NGS plan is known as GRAV-D, Gravity for the Redefinition of the American Vertical Datum. One objective of the program is to build an unconstrained gravimetric geoid model that will support both orthometric and dynamic heights. However, the geoid will not only be modeled it will also be monitored. The masses of the planet are in a constant state of flux and thereby gravity changes. As gravity changes, heights change. NAVD88, a datum based on a static gravity model cannot account for that.

The realization of NAVD88 included conventional level work and the establishment of orthometric heights on hundreds of thousands of passive benchmarks. The benchmarks were frequently set along railroads and highways because they offered flat continuous pathways for differential levels. This approach makes the distribution of benchmarks uneven. It also makes them vulnerable. When tracks and lanes are re-constructed or improved thousands are destroyed or disturbed. It happens every year. Even when they survive regional distortions are inevitable, their heights can be invalidated without notice by crustal movement such as isostatic rebound, freezing and thawing, uplift and subsidence. Subsidence is particularly troublesome in low-lying coastal areas along the Gulf of Mexico, Chesapeake Bay and California agricultural regions. Some of NAVD88’s original benchmark’s heights have been updated or superseded with local re-leveling or GPS/GNSS. However, there has been no nationwide effort to re-adjust NAVD 88 since its implementation and NGS does not have sufficient resources to check and/or replace existing passive benchmarks. This is particularly significant because users currently rely on those benchmarks for access to the datum.

In the new paradigm that will replace NAVD88 NGS will constantly monitor the varying gravity field making it available to users at an accuracy of 10 microGals, anytime. In other words, the foundation of the new vertical reference frame will be a temporally tracked gravimetric geoid model.   Clearly such a real-time system cannot be served to the users via passive monuments. Therefore, NGS will no longer maintain or check benchmarks, that will devolve to the users themselves. It follows that as their reliability decays, reliance on benchmarks will decline However, users with a GPS/GNSS receiver and the gravimetric model from GRAV-D will have direct, immediate and accurate access to orthometric heights. Not only will the constant monitoring ensure that crustal movement will be known and accounted for, the target accuracy for the system is 2cm, 0.06 ft.

The gravimetric geoid is free to be the geopotential surface that best fits Mean Sea Level (MSL) in a least squares sense. As sea level is rises NGS will likely update the geoid model so that it fits the changing MSL. Users will notice orthometric heights changing as the vertical distance separating a given location and MSL decreases. This will be of particular importance in coastal areas.