Last month I attended the BIM Forum in Dallas, Texas, organized by the Association of General Contractors of America. This year, BIM Forum was held in conjunction with the USIBD‘s (U.S. Institute of Building Documentation) Fall Forum, the non-profit body that defines the level of accuracy standardization framework that is applied to many as-built scanning projects in North America. I was hoping to see a conference focused on information management procedures in the construction industry, with a heavy emphasis on users and service providers describing best practice when using 3D scanning or reality modelling to drive many construction procedures.

The event did not disappoint.

“Three years ago, we needed to explain what a point cloud was, now everyone knows.” [sic.]

Day 2 of BIM Forum had industry veteran Ken Smerz presenting a session called “Scanning 101.” In this general assembly session, Ken provided a very relevant summary of what scanning—and its associated point cloud deliverables—can provide for the construction industry. Though the presentation made it clear that point clouds are no longer a novelty, it was Ken’s Q&A and conclusions that I found most relevant, because they offered a way of gauging how people are really using reality capture for building documentation.

Ken’s conclusions highlighted a change in paradigm: While scanning, in the past, has been used most profitably in the collection of as-built data for the pre-build phase of a project, now the value of reality capture is in quality assurance (QA) and monitoring the project throughout the build.

The challenge is that there is no budget line-item for QA.

We have written much about the opportunities provided by the ever-falling cost of the hardware that collects 3D representations of our environment. While its true that developments in technology and associated initiatives bring opportunities, they also bring organizational pressures.

Set this idea in the context of the presentation from Cindy Baldwin of VDCO Tech. Baldwin argued that there is a perception that technology and automation is going to replace jobs in construction, even going so far as to say that “the construction industry will lose 500,000 jobs by 2020 due to robots.”

However, this creates a burden on everyone in the supply chain to become familiar with new concepts and technologies such as drones, laser scanning, and augmented reality, just as we have done just by asking all levels in the hierarchy of a project team structure to conform to BIM-related processes, policies, and procedures.  This is the organizational pressure I mentioned earlier. 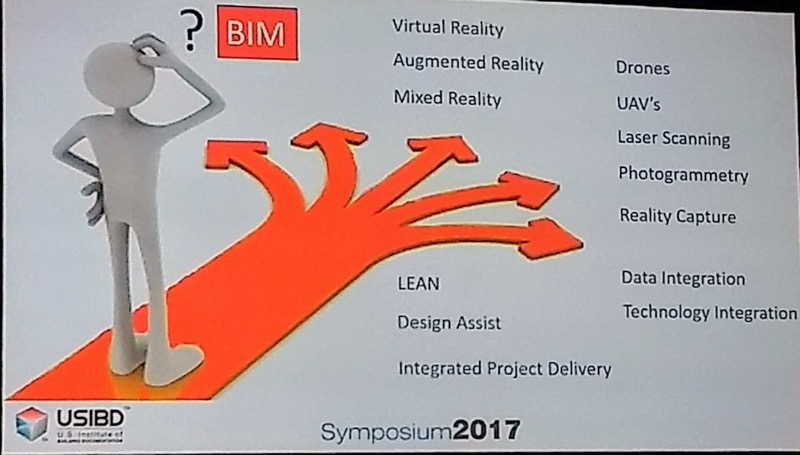 First we had to learn BIM, and now…

Baldwin made a number of other great points about reality capture in construction. 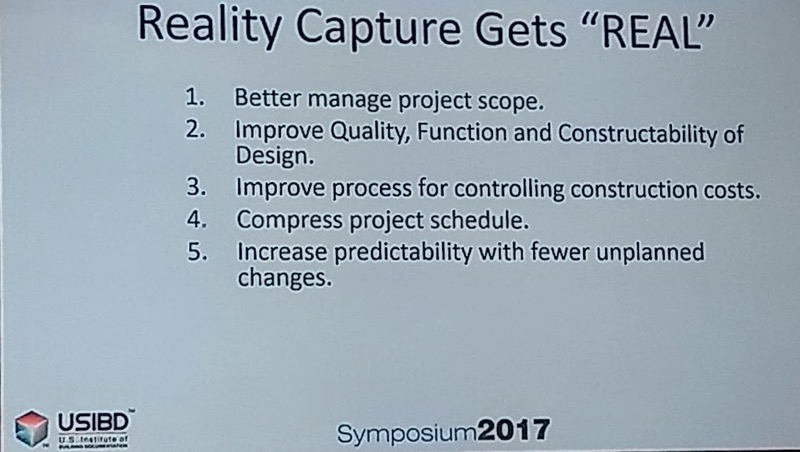 Where reality capture gets “real” for construction

The reality capture industry needs to change its perception

In the discussion in the general forum following Ken Smerz’s introduction to scanning it became clear how the projected value of reality capture will be realized. We need to move our perception of what a reality capture device allows us to see, so that we think beyond just “knowing that something exists.” Cindy Baldwin reminded us that “reality capture does not mean anything without reality computing.”

Looking at these presentations and discussions together, you can see that BIM Forum further underlined an important point about reality capture. As an industry, while we might be rushing to produce the lowest-cost 3D imaging devices possible (or even increasingly sophisticated methods of streaming point clouds onto a user’s desktop), we need to focus more on the workflow and better address how the user can best exploit the product of reality capture.

What we need is an increased number of methods that permit the construction specialist to start working with the project relevant information that comes from reality capture, but without needing to think about the translation of the point cloud.

One step toward the necessary workflows has been taken by software applications that automatically convert a point cloud into a data model made of objects and geometries that are similar structure to the 3D design data used by the VDC engineer. (Pointfuse is a good example of this.) As mentioned in Cindy Baldwin’s presentation, additional steps are being taken by tools such as Verity and SKUR, which provide construction-relevant reporting verification.