Odds and ends from the first Riegl show

As both Faro (I’m going to go with lowercase Faro from now on – that’s AP style and I’m sticking to it) and Riegl launched user events a week apart from one another in the same city, it’s hard not to do a little comparing and contrasting, but I’ll keep that part of this short. I tweeted yesterday that Faro was like attending a rock show, while Riegl was like attending a string quartet, and I think that metaphor basically holds.

First and foremost, Faro’s was simply a larger event, with a bigger and more elaborate stage for presentations, more intricate A/V, and they had a go at an exhibit hall. With the different companies following one another up on stage, and the exhibit hall in between, it was a little like going to Coachella, actually, where band after band come up to rock the stage and in between you’re meant to go buy merchandise and trinkets. Some of the bands are more impressive than others, but generally the curation is pretty good.

Riegl was a little more than a third the size of Faro, attendance-wise, plus, they only focused on their airborne and mobile technology. Terrestrial scanning was for another day (even if more than one attendee was using terrestrial scanning technology to jerry-rig mobile scanning on the backs of things like four-wheelers and boats). The presenters were sizably more subdued, but also much more intricate. To listen to Riegl CTO Andreas Ullrich outline the mathematics behind Riegl’s echo-digitizing lidar technology, and the innerworkings of waveform processing and multi-target returns, was to listen to an intricate piece by Mozart (he’s Austrian, after all), where at least a good portion of it was sailing right over my head.

Riegl made the most effort I’ve seen at an industry event to assure its users of the quality of its data and its attention to quality and accuracy (and I saw Leica’s presentation last year at Hexagon on their calibration efforts). I can’t count how many times I heard the word “ruggedness.” Bobby Tuck, of Tuck Mapping, made a special point during his presentation to say that he’s been flying Riegl scanners on helicopters for 10 years plus and has never had an equipment failure.

Clearly, they were making their play to those who care most about getting in the hundredths of inch for accuracy. This was very much pitched to a surveying crowd. There were no looky-loos or folks just entering the scanning business from an ancillary field.

However, there were airborne people with a background in orthophotos curious about diving into lidar. I can’t imagine they were anything but assured and excited by the technology (if not the investment necessary to get in the door – these systems ain’t cheap).

There was a modest display area where people could check out the equipment, as seen here: 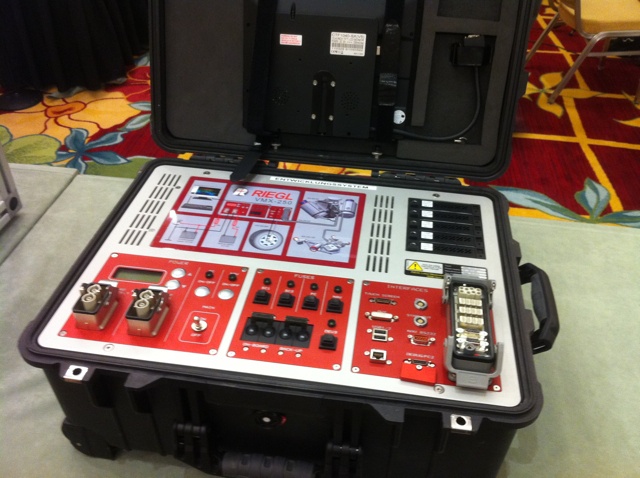 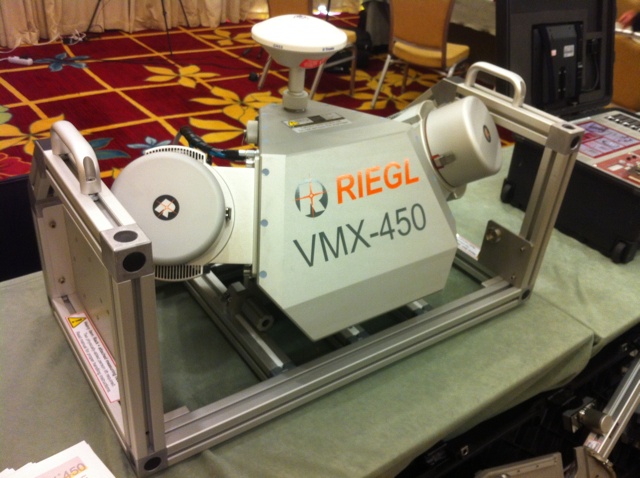 There were also a couple of companies with table tops in the entrance way to the event, as you can see here: 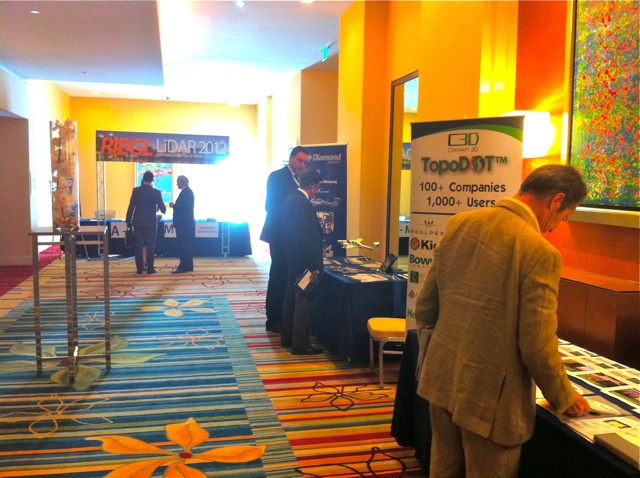 Like I said, modest, and I took the picture after most people had headed off to lunch, so don’t take this as being indicative of attendance. If anything, the 120 people at the event were incredibly attentive. The crowd sustained for the entirety of the long day of presentations and were remarkably engaged. While at the Faro event there was literally zero time for question and answer after each presenter, at Riegl there was likely to be a highly technical question after just about every presenter. Some were definitely of the “gotcha” variety, but most were honestly looking to move the conversation forward.

The user presentations, too, were highly technical, always concerned with very precise display of accuracy achieved and methods undertaken.

In the Faro recap, I said that I didn’t think the majority of attendees were Faro loyalists, and that most were either coming new to scanning or had other scanners in the inventory. Here at Riegl, these were definitely Riegl devotees. They LOVED Riegl, almost to a person. Maybe there was a grumble here or there about price, but in general they really liked the product and wanted to spread the gospel.

I’m not surprised by that, considering the new people Faro are bringing to the market with their marketing and unit price, but it definitely made for a different conference experience and set of conversations.