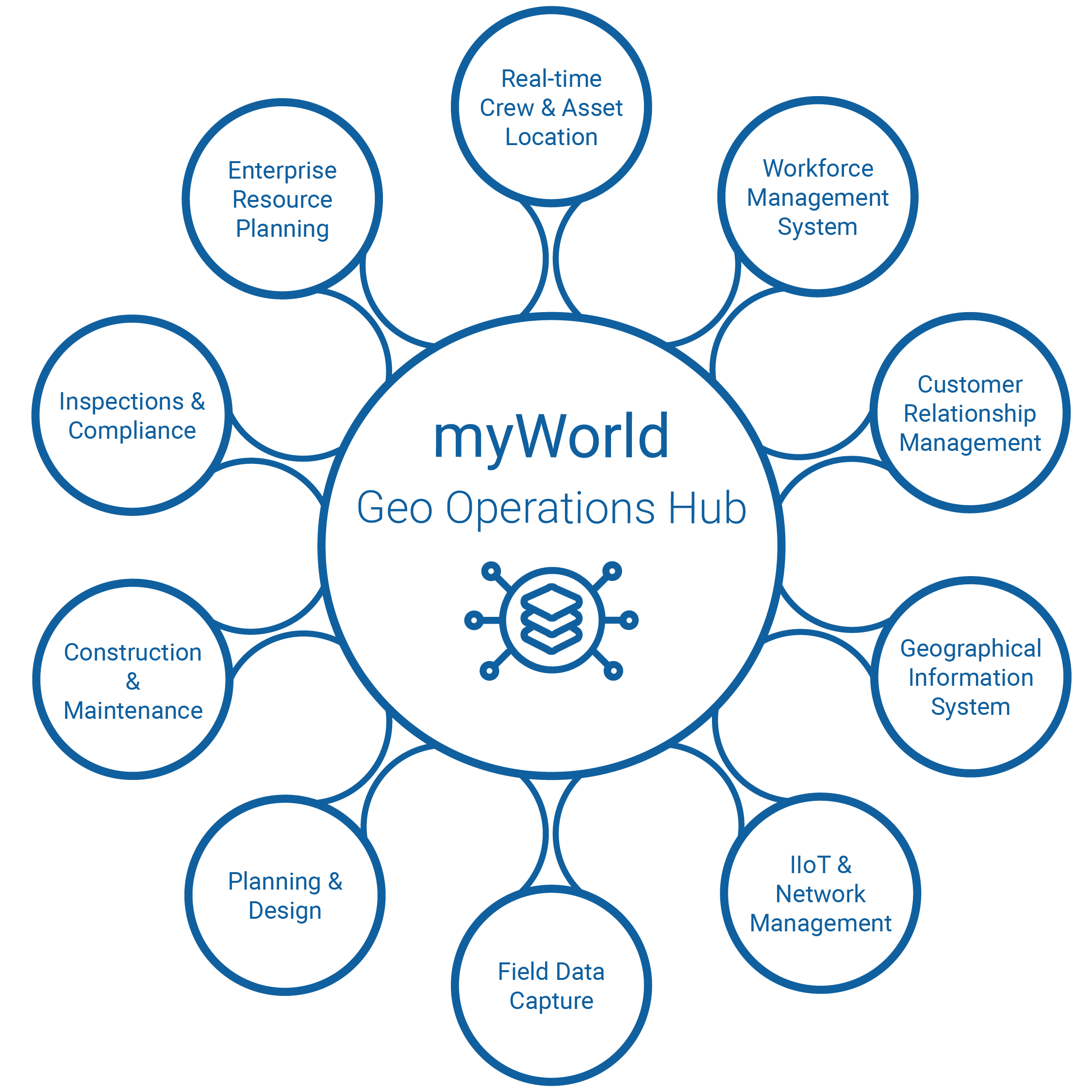 Wednesday, Oct. 10 started with a brief presentation by Ubisense CEO Richard Petti, who described their myWorld software solution as “a real-time digital twin of physical operations,” a reference to its dynamic spatial data integration with enterprise business systems.

He then described the thoughts and empirical findings of famed economist Paul Strassmann, who inspired the concept of “digitizing the value chain” by recommending increased spending on operations information technology (IT), rather than on management IT systems. As such, the company’s newly coined enterprise concept, the “Geo Operations Hub”  focuses on customer satisfaction, driving quality, reducing cost, and increasing productivity. The main strategy for this approach is to “enable location as a key part of digital transformation,” thus showing their corporate customers a clear path to “unify enterprise data” and make it “accessible by anyone, anywhere.” 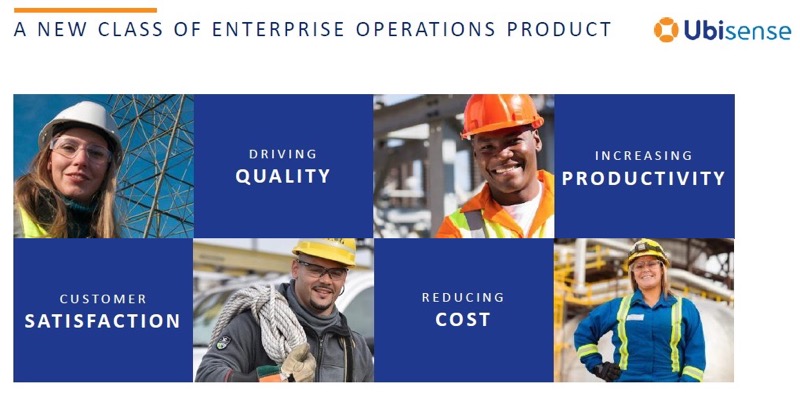 The value of integration and non-GIS users

Since my arrival to Denver’s geospatial scene in the late 1990s, I’ve been able to get to know Ubisense’s Chief Technology Officer (CTO), Peter Batty, so I was very interested to hear his thoughts about the direction of their software offering. Peter strongly reinforced the benefits of their new ‘Geo Operations Hub’ concept, citing the clear delineation between field, office, and external geospatial data sets, and the positive synergies yielded by integrating spatial information with all relevant corporate IT systems.

As a well-respected geomatics industry veteran, Peter has great perspective on the application of location technologies to improve business operations. He spoke about the myWorld Advanced Research Program, which he described as a way to further introduce emerging technologies including 3D reality capture, machine learning, and voice recognition into their existing solutions. Furthermore, he described Ubisense’s focus on the “95% of non-GIS users” within an enterprise that need simple, easy-to-use software tools to support business operations. 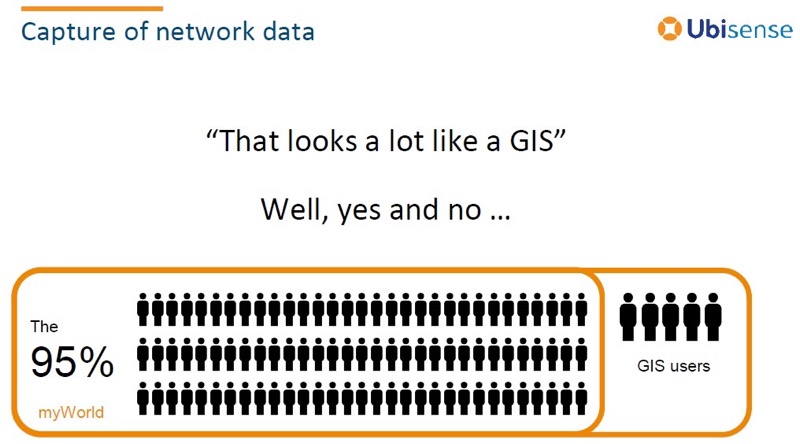 Following lunch, three Ubisense customers provided insights into their unique business challenges and described how they leveraged myWorld to support their end-user requirements.

Perhaps the most fascinating discussion involved the integration of myWorld with the customer relationship management (CRM) giant, Salesforce. As stated in the marketing materials, the objective of the myWorld for Salesforce application is to allow “sales and operations teams to increase sales win rates, improve customer satisfaction and drive engineering productivity.” This new tool is now available on Salesforce’s AppExchange, their massive “business app ecosystem.” 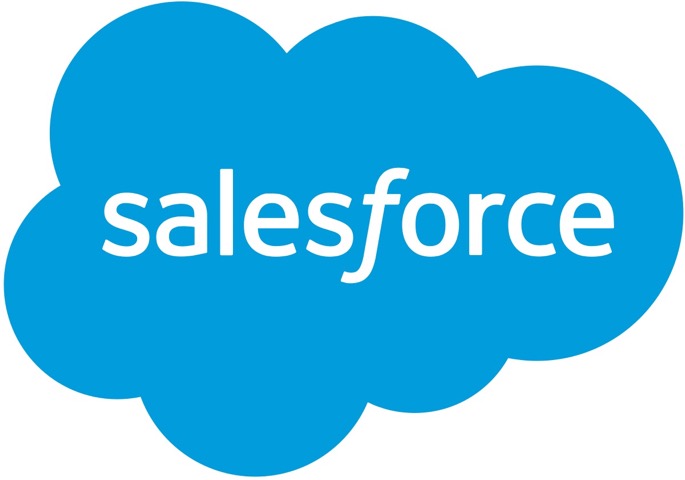 To illustrate the many benefits of this new integration capability, Kris Boccio of Zayo provided business case studies from the cable industry that clearly demonstrated the value of myWorld. He focused on its ability to leverage asset maps with the business data integration, as a way to improve automation for the enterprise’s end users.

The second speaker, Colleen Villegas with Montana-Dakota Utilities, spoke on how they effectively harness breadcrumbs, which represent the documented path of the survey inspector in the myWorld Capture tool. These paths are displayed as a series of small dots and are used as a method to both monitor and report gas leak survey progress of their pipe networks. By capturing the exact path (via GPS) that the field workers take during a gas leak survey, asset managers can ensure that all facilities are properly inspected and documented, as required by government regulations.

The final speaker, Faisal Vishram, is the Senior Technology Architect for Telus, Canada’s fastest growing telecommunications company. Faisal described how Telus utilized myWorld to roll out their new, PureFibre™ Internet product, and how its browser-based clients allowed for a smoother system implementation. Currently, IT staff can simply define a new user (with specific roles & permissions) and provide the username/password to the employee for immediate system access. This capability saves expensive IT staff resources and reduces the time spent on client software installations and system updates for each user. He also discussed how Telus utilized their asset information to enable the augmented reality capabilities of Augview, which allows field users to visualize underground objects they couldn’t normally see.

Thursday, Oct. 11 started with off with a bang, as Robert Cruickshank III, Visiting Researcher at the National Renewable Energy Laboratory (NREL), provided his insights on the growing integration of broadband and electrical networks. In order to raise the efficiency of generation, one solution that he suggested was to “broadcast the forecast price of electricity so smart devices can choose to use power when it is less expensive” – a unique approach that raises the efficiency of traditional generation methods and allows more renewable energy sources onto the grid.

The final client presentation was delivered by David Lawrence, Senior IT Network Analyst at AEP, a large, investor-owned utility based in Columbus, Ohio. AEP serves almost 5.5 million customers across 11 states and supports an electrical transmission network covering more than 40,000 miles. He described his team’s support of a $1B network modernization plan, which included a 50,000 mile fiber buildout. Almost overnight, this new capital program caused his staff to grow from just 10 people to over 250 employees. He then described how the myWorld platform enabled AEP to quickly train new employees, allowing them to effectively utilize the ‘Capture’ tool for their field operations in short order. David also praised the ability to ‘customize’ the myWorld mobile app to support a ‘PANIC’ button for medical emergencies in the field. Unfortunately, David developed this idea following a very painful experience of being repeatedly stung by wasps during a field visit!

Following lunch, attendees were asked to break into three (3) groups to discuss specifics issues involving the myWorld software solution, or business tracks for the utilities and telecom industries. These “real-world” client experiences were very insightful and allowed for highly interactive discussions, which helped me to more fully understand the business and technical issues facing commercial firms.

It was clear that attendees enjoyed the opportunity to directly engage with Ubisense staff, as they were able to get answers to their many questions about potential application enhancements and to provide suggestions about future implementations.

myWorld: A radical approach to location intelligence for non-GIS users in utilities

Bill is a geomatics technologist and sales / marketing professional based in Denver, CO.

He has significant experience developing technical solutions for 3D capture projects, supporting the mapping, civil infrastructure, transportation and energy markets in the US and abroad. Bill is very active in helping to develop the unmanned aircraft systems (UAS) industry in Colorado and he has been a frequent speaker at national and regional geospatial conferences. Bill has worked in the geospatial industry since 1993 and currently works as an independent geomatics consultant.

Bill earned an undergraduate degree in Business Administration from the University of Louisville and a Master’s degree in GIS & Remote Sensing from the Georgia Institute of Technology.

myWorld: A radical approach to location intelligence for non-GIS users in utilities