For those of you who may have been to our SPAR International event in the states and are wondering what’s the difference between that event and SPAR Europe, I’d say one difference is that the programming has a lot more research projects on display. Technology that isn’t quite ready for commercialization, but is damn interesting.

This morning’s opening keynotes are just one example – fairly incredible presentations from Luc van Gool and Marc Polleyfeys, both of ETH Zurich, showing off what’s possible for turning images and video into 3D point clouds and models (we’ll have a longer write-up of this at some point in the near future). Really impressive stuff. Ready for commercial projects tomorrow? Not quite. Would a creative mind see applications readily? Absolutely.

Similarly, Judith Dijk, senior research scientist for intelligent imaging for Netherlands research house TNO, almost off-handedly had on display a rig that bolted a Kinect sensor onto the back of a laptop with a tablet-like touchscreen to create a real-time 3D modeling tool. Dijk was part of the CSI the Hague project and her team developed the Kinect gadget so crime scenes could be quickly gathered and modeled. Here’s what the device looks like: 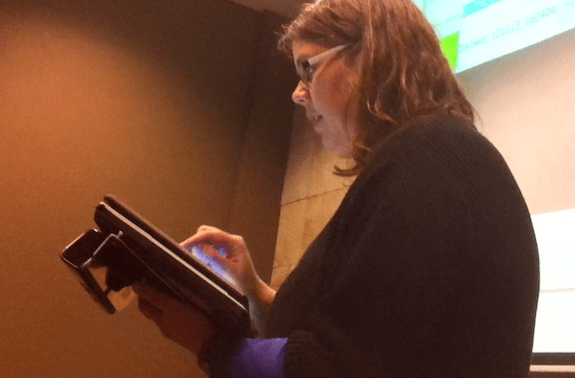 And here’s just a little sample of the data it gathers (she just plugged the laptop into the projector so we could watch her gather data from the room in real time): 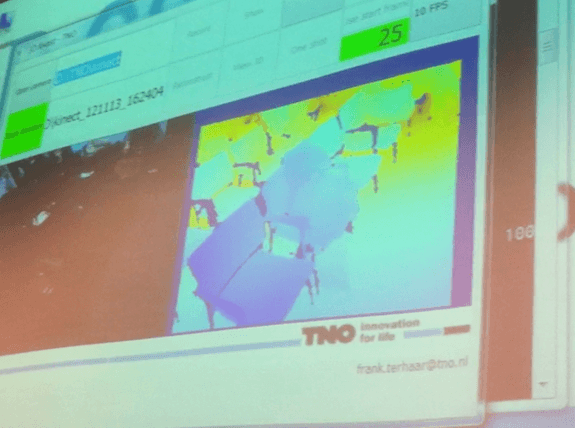 From there, she spit out a very raw point cloud in about three minutes. Accuracy? Who knows? Usable data? Maybe for something. All of that could probably do with some refinement, but the thing is they’re clearly pushing the envelope in looking for tools to help with investigations. Dijk mentioned they’re looking for a partner to help them productize the technology and bring it to market. I think she’ll probably find herself with a few follow-up conversations.

Really, the forensic track was impressive in general this year. I was forced to stop and watch when I saw the crowd gathered ’round to to watch Jurrien Bijhold, of the Netherlands Forensic Institute and CSI the Hague, proxy a live demonstration of 3D data capture of a crime scene. In this particular case, Shabtay Negry, COO of Mantis Vision, was on the spot, as Bijhold made him get all dolled up to show that the device doesn’t just have to work, but it has to work with rubber gloves on and in a funny tyvek suit. 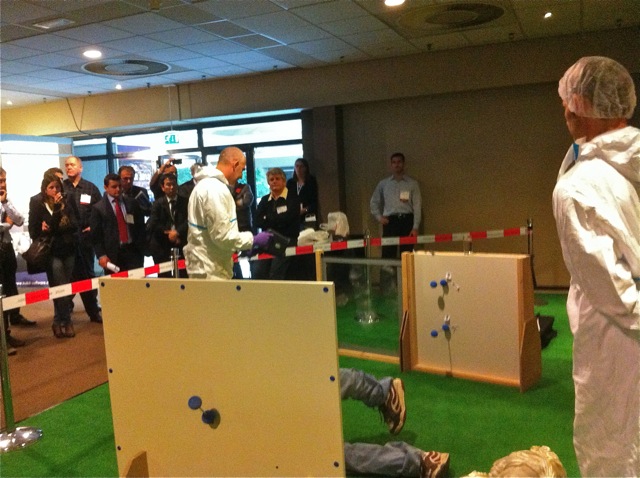 Can the Mantis F-5 get those shell casings? No. But the new close-range Mantis product can. How does it do with glass? Sometimes not well. What about water? The water would probably not be a problem, but the shell casings in the water might be too small for the F-5. Can it read those numbers? No. Jurrien was merciless, and the crowd was riveted. Z+F came next and Bijhold gave them no quarter as well. He was a regular drill sergeant up there, which was great, since the point was to demonstrate actual crime scene conditions.

It was helpful for the forensics-minded attendees, for sure, who are attending in good number this year, but also for the manufacturers. Every vertical has its own needs and demands, and this emphasized those of the forensics community. Like many other application areas, they have their specific demands and desires and manufacturers who want their business would be wise to cater to them.