Melown is a Czech startup active in the 3D web mapping space. The company started out as a platform for creating and sharing 2D and 3D maps, combining cloud-based data delivery and a JavaScript software API. Nowadays, it offers multiple products and services in this field, ranging from 3D mapping services to a mapping stack. Notably, Melown uses the cloud to store data, and so the company can offer data rendering and visualization through a web browser instead of desktop software programs.

Melown Photogrammetry is a 3D mapping service. Melown can obtain aerial imagery of any area of interest and deliver it as a true 3D map. (A true 3D map is an interactive visualization of an area of interest that you can explore in any modern web browser.) To make this happen, Melown can gather image content from cooperating providers on five continents, but it´s also possible to use your own imagery and let Melown do the modeling.

Melown uses its own cloud service to host and distribute the data model, but users can also download the data model through an FTP server. Derived products such as a textured mesh, a georeferenced heightfield in GeoTIFF format, an XYZ pointcloud, and a georereferenced orthophotomap are also available. 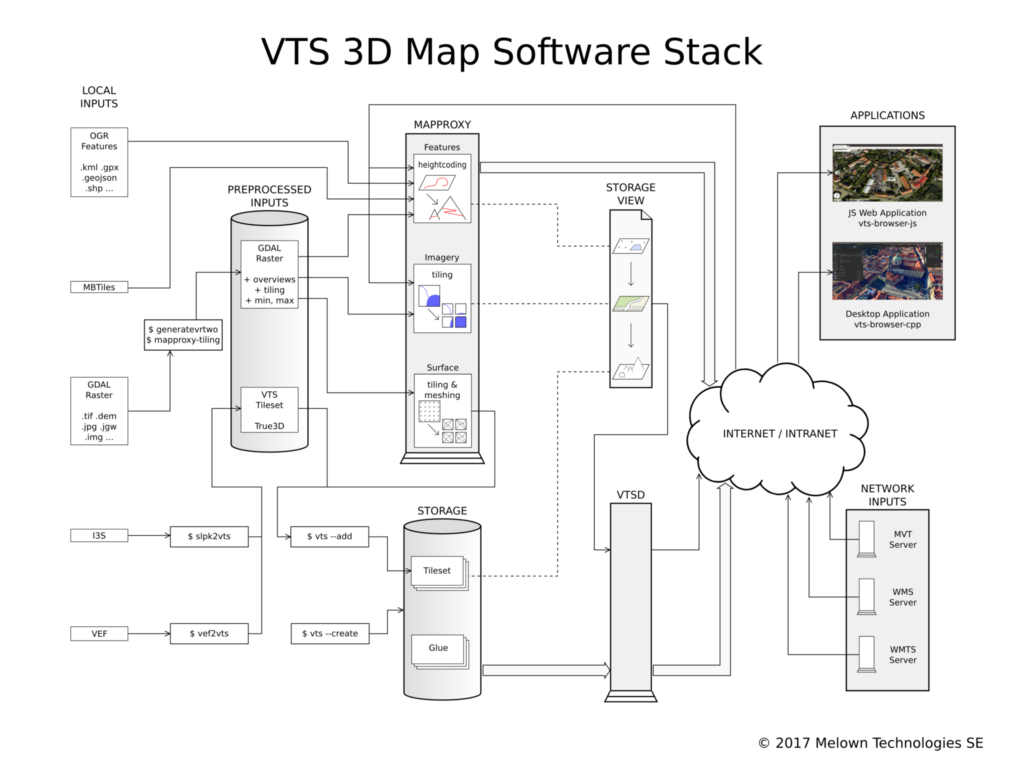 Melown’s most interesting and ambitious undertaking thus far is a fully integrated rendering and visualization stack for software developers called the VTS 3D geospatial software stack. The company describes it as a modern version of Google Earth Enterprise, a tool for businesses to build and host private versions of Google Maps and Google Earth. It was open-sourced last year.

Melown´s VTS stack is made up of different components, such as 2D and 3D geospatial data fusion tools, server-side components for 3D data streaming, and a set of client-side libraries for interactive 3D map rendering. It provides all components that are required from server-side data storage to the client browser or desktop and can be used for streaming and rendering spatial data.

The entire Melown VTS stack is open source under the BSD 2-clause license and consists of six main projects with over 20 supporting repositories. Detailed online documentation is available for developers, as well as a Github page that lists all repositories. Melown also participated in recent FOSS4G events and promoted its VTS stack there.

For a non-developer audience, there´s a third product offering built on top of VTS called Melown Cloud. Similar to Google Earth Enterprise, this web-based 3D map development platform can be used to create interactive 3D maps in a point-and-click interface and integrate personal datasets with Melown’s collection of global data. Finally, these maps and customized 3D map applications can be shared with third parties.