Lidar as art (and history)

One of the most obvious benefits of 3D data capture is its ability to document the real world for posterity. We can create exact representations of the way things were at a specific time and place. Sure, this can be great for documenting the percentage of completion of a construction site, or creating a record of how space in a large corporation is being utilized, but it intuitively makes the most sense for crime-scene documentation, where you never know which detail might wind up being important. And there are few crime scenes as large and prominent in the U.S. consciousness as Ground Zero, as it has come to be known, in New York City.

Well, it turns out the scene of the World Trade Center attacks on Sept. 11, 2001, was documented extensively via lidar, and we do have 3D images to inspect. Not only were these images and data crucial in the immediate aftermath of the attacks in assessing the damage and preventing further loss of life, but the general public now has an opportunity to inspect, and reflect upon, these images as part of a traveling art exhibit, “Charting Ground Zero: Ten Years After,” which comes this month to the Woodward Gallery, on NYC’s Lower East Side.

Seeing these images for the first time was incredibly powerful for me. There’s something about the starkness of the lidar images, the lack of artifice, that makes the images that much more powerful than the 2D images and video that just about all of us have seen hundreds of times.

I can’t imagine a more stirring pair of images than these: 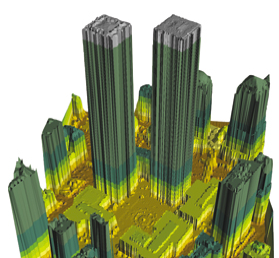 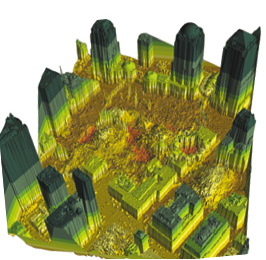 The image on the left was taken July 1, 2000. The right? Sept. 19, 2001. It depicts so powerfully the loss that New York City, the United States, and the world suffered on that day. The gaping hole in both the skyline and our hearts. The nothingness so many of us felt so tangibly.

Yes, these images and this data are useful as tools for making decisions and assessing impact and all of that. But they are art, too, as it is art that so often helps us work through emotions that are impossible to put into words, either spoken or written.

This marked up orthophoto as map is just as powerful. 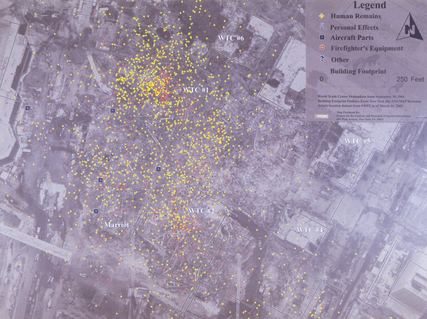 The distribution of “Human Remains”? “Personal Effects”? “Firefighter’s Equipment”? It’s heartbreaking. To ask people to consider that map as an image, as a piece of art, is to ask them to contemplate not just the event itself but the tasks presented to those people in charge of making New York City and the country whole again. Can you imagine being the one to enter that data to create that map?

That’s when art is powerful, when it demands that you consider something you hadn’t thought to consider, or were avoiding considering at all because it simply wasn’t something you wanted to think about. Great art moves you and changes the way you think about things and, ultimately, makes you a better person for having been exposed to it. This is the kind of exhibit that succeeds on all of those fronts. That it is lidar data forcing you to think that way is enough to make you reconsider the “value” of the data you’re collecting on a daily basis.

How lidar can help in the Sandy clean-up