While RealWorks has been Trimble’s solution for working with point cloud data, a couple of years ago they added support for point clouds in their geomatics workhorse Trimble Business Center (TBC). (I’m really not sure why it’s called the “business center,” as opposed to something more geomatics- or survey-related but, I digress.) Recently, the launch of the Trimble SX10 scanning total station has created a lot more demand for TBC among point cloud users, and Trimble has answered this demand by continuing to add new tools to TBC’s point cloud module. As a recent purchaser of an SX10, I found myself needing to learn TBC, and if you’ve read this far you might as well come along for the ride.

To put it bluntly, were it not for the SX10 I do not think I would have ever tried TBC’s point cloud module. That’s a shame, because it actually does some things pretty well. It also brings point cloud data to the survey world in a way that is easily digested by people who look at reality capture professionals as the source of many of their problems. 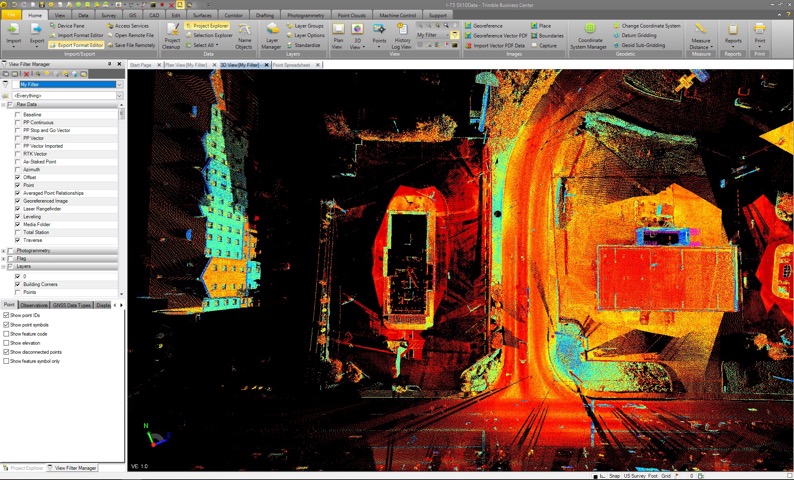 The GUI is set up with a Ribbon along the top of the screen and the Project Explorer and View Filter Manager on a left side panel. Using the View Filter manager, you can turn on/off visibility of data by name, type, or layer. Selecting most functions will launch a separate dialogue menu on the right side panel. In fact, as a former Trimble Geomatics Office user, I found many of these dialogues to be remarkably familiar.

When it comes to functions, most will start with the Import/Export dialogue. Choose a folder and the dialogue allows you to see all importable file types in that folder. However, there is also an Import Format Editor, which allows users to create custom import types. When it comes to point cloud data, TBC supports e57, LAS, and ASCII (pts, ptx, xyz, etc.).

Once the point cloud data is in TBC, there are a few options. However, it’s not designed to replace Realworks, and this is not an application for modeling or heavy feature extraction. You can make meshes and perform some measuring (including volumes) but it is really designed to concatenate collected data and extract land-survey type deliverables. However, there are a few things that it does better than any other tool I’ve used to accomplish this goal.

The first function is called “Classify Regions.” Essentially, this tool cleans point clouds like nothing I’ve ever seen. You select the point cloud you want classified, and then choose how many classification groups you want it to use. Then it goes to town subdividing the cloud into differing classifications for surface data, trees, buildings, poles, vegetation and so on. Every time I use this tool I feel a tinge of regret for how many days—nay, months—of my life I’ve spent cleaning point clouds by hand in order to make a surface model! It really is that good.

The terminology is a bit confusing, as this is not the same as LAS classification codes. While those codes are also usable in TBC, the “Classify Regions” command is based upon geometry. However, this also means that it works on unstructured data such as point clouds, like UAV data from Pix4D.

Another function that I’ve found useful is the “Scan to CAD” command. This was new to the 3.9 release (most current release is 4.0) and it essentially lets the user create CAD points by subsampling the selected point cloud data. This has proven to be very useful in streamlining workflow, as it gets the data into a format that many more coworkers can use compared to point cloud data.

From a processing side, you simply select the area, set the sample spacing and the layer you want the extracted data stored on. While the typical workflow is to export these points as a CAD file (DWG), you can also convert them into survey points. This allows you to add a field code and a point number scheme. The advantage here is that, with a survey point, you can export the data as an ASCII file so that downstream data processors and CAD personnel are able to use the points like any other survey data.

For those of us accustomed to using point clouds, this may seem a bit inefficient. However, for those just getting into reality capture technologies or with CAD departments that are, shall we say, inflexible, this offers the ability to seamlessly integrate a new data source into their current workflow. 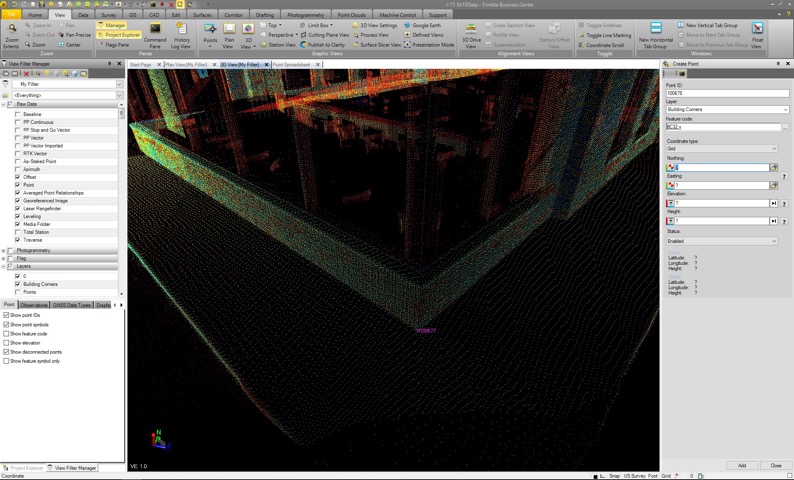 To be clear, there are additional point-cloud related functions as well but I’ve not found them to be as useful given my current hardware and workflows. The registration tools haven’t been necessary with the SX10. Because it is a total station, we are typically in a known position when scanning with it. By importing the .job file, the data comes in referenced to the survey control, and no registration is needed.

I did try using the cloud-to-cloud registration function with data from a Leica C10. Interestingly, it worked pretty well (assuming sufficient overlap) on exterior scans, but I could never get it to work on interior scan data regardless of the overlap. I say “interestingly,” as this is pretty much the opposite of other cloud-to-cloud registration engines that I’ve tried. I’ve not been able to get to the bottom of this, as it’s not a feature that I’ve used in production.

Another, more promising tool is the Orthophoto tool. This enables the user to create an orthophoto from the point cloud. Users can also create an orthorectified image; both handy ways to get reality capture imagery to CAD users in a lighter-weight format.

To this point everything I’ve mentioned has been part of the Point Cloud tab in the ribbon. There is also a Photogrammetry tab that enables users to create point clouds from aerial imagery and an entire module devoted to UAV data (UAS Master). There are tabs devoted to machine control data production, GIS deliverables, and Drafting as well. Add to that the main use of TBC, which is the processing of total station, GPS/RTK data, and COGO functions and you get a sense of just how much can be done within this rather dense software suite.

As many of us tend to do, I am only skimming the surface of the capabilities at this point and I’m six months into using it in a production mode. Seeing as that alone has me considering the purchase a success, I’m certainly looking forward to expanding my working knowledge into some of these less explored tabs.