Getting past Ryan Seacrest at CES

I’ve had the chance to go to the Consumer Electronics show a couple of times over the years, and never took advantage of it, always following it from afar. If you’re a tech geek and haven’t been, perhaps you think of it they way I think of it, in the same way my kid sees Disneyland: You’ve got to go at least once. (And thank goodness we took care of that Disneyland thing this year – we can cross THAT off the list…) I didn’t go again this year, but it’s been hard to ignore some of the 3D news coming out of the show. For those of you who don’t spend all day strapped to an internet browser, here’s a wrap up: 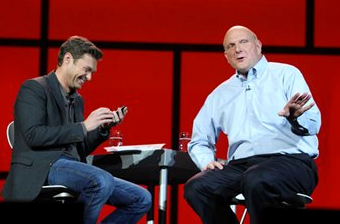 That Ryan – such a great foil for Steve.

• Microsoft’s annual keynote, which was its last, made it pretty clear that they’re finally taking Kinect technology seriously as a commercial business possibility. Here’s the official Microsoft internal blog wrap-up of the keynote from the corporate VP of communications, and there’s some pretty cool stuff in there. Why on earth Ryan Seacrest was involved, and why they’d think anyone would want that giggling pretty hairstyle muddling up their tech news, I’m not sure, but pay attention to the Kinect stuff (and, no, not the two-way Elmo part):

We also announced that the new Kinect for Windows commercial program will be available on Feb. 1. Microsoft is taking Kinect for Windows beyond entertainment, already working with more than 200 partners, including United Health Group, Toyota, Telefonica, Mattel, American Express and more, in revolutionary new ways. Phew!

That’s right. Kinect’s not just for hackers anymore. How are these 200 partners using what’s essentially a 3D scanner for their businesses? Some of it’s probably well behind locked doors, but expect to see some creative gesture recognition stuff very soon.

I’m imagining American Express is just going to blast me in the face with a satellite-beamed projection of their logo every time I reach for my wallet in a public place, but who knows if I’m off base there. 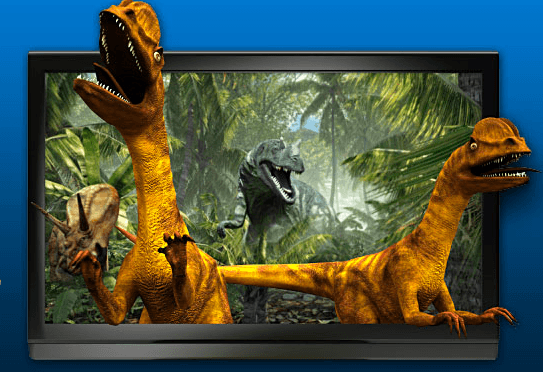 Thanks to Stream TV, you can get those dinosaurs of yours to pop right out of the screen.

• Another entrant in the no-glass 3D TV experience. This time, it’s not a $5k Panasonic, but rather Stream TV Networks, a company claiming to automagically turn 2D images into 3D images (I feel like I need to see this to properly understand it, but here’s one explanation).

You’ve read me going on about the viewing experience any number of times, but I’ll say again that a good 3D experience for the viewer makes that viewer more likely to see value in the 3D data, even if it’s slightly irrational and good 3D data collection can easily lead to 2D paper deliverables. This entrant is interesting because:

The technology promises to address the major concerns critics currently have with 3D video—the glasses and the potential for discomfort. Price has been another setback, but because the tool works with existing machines, it is likely to be less expensive than other 3D technology.

Cheap, and no glasses. But does it really work? I need a demonstration, clearly.

• Cubify! It’s the little 3D printer that could, aimed, with all seriousness, at 8-10 year olds. There’s a great write-up of it here from Treehugger. Sure, the initial play is to just download designs from a web site, modify them a little, and then print them out. But, hey, doncha know that Geomagic has a cool way to use a Kinect and its software to make a quick print-out of your own head (or whatever you want)? Here’s a handy video to explain:

Needless to say, I desperately want one. Do you think it’s good for the 3D data capture industry to have an army of kids growing up with the idea that of course you would scan something and just print it out? I do.

• One publication says 3D is out, though! Has the bloom of the 3D rose already faded in the consumer electronics world (again)? Just as 3D movies had a hey-day, fell apart, and then came back with a too-expensive vengeance, I do wonder if all these 3D TVs that don’t really work well and give you a headache are going to force yet another retrenchment. When compared with the kick-ass ultra-thin ultra-HD TVs, they fall sort of short, don’t they? Does this really matter for 3D data capture? No, I don’t think so. I think a better viewing experience would help, but we all know most of this is about fake stereo 3D videos anyway. Still, a mainstream meme that 3D is on the way out could be damaging in small ways.

• And don’t forget augmented reality. The Guardian’s lead is this: “Many are speculating that this could finally be the year that augmented reality makes a genuine impact on gaming.” Haven’t we heard that one before? Virtual reality is good for data capture because I think there will be a demand for real-world environments to play in. Sure, the initial demand is going to be for space-worlds, and dungeons, and places you actually CAN’T visit, but I think in the long run there will be a place for scanning and capture of places that only a few people ever really get to visit: The Hermitage (Google thought there was a marker for this), say, or the beaches of Normandy.

But augmented reality is a different animal, an integration of what you actually see and what your phone or some other viewing window can add to that reality. This new augmented reality browser Aurasma is pretty dang cool, allowing for the integration of 3D objects into reality. The example given in the article is a flying pterodactyl that you can watch fly around Big Ben, not only getting blocked out when it “flies behind” Big Ben, but also allowing the viewer to move and see different sides of said flying pterodactyl. If you can put in animations, you can put in real-world 3D-scanned objects, allowing you to, say, preserve an environment forever just before it’s torn down.

Anyway, yes, this is consumer stuff. It’s right there in the title of the show. But CEOs are consumers, too, and you never know what might bleed into commercial use. Like that Kinect. If only you’re willing to move to Windows 8…

Two more Kickstarter projects you need to know about