Finding the Beauty in Point Clouds

In my pursuit of stories for SPAR 3D I often come across unusual applications of 3D scanning technology. A tool is, after all, a tool – and how we apply it is limited only by our imaginations. In this blog post, I catch up with artist Michelle Hessel who’s using an unusual medium for her art: point clouds.

Michelle Hessel was first introduced to 3D scanning when she was working towards a master’s degree at the Interactive Telecommunications Program (ITP) at New York University (NYU). Hessel was not going to school to learn how to use to the technology for its typical purpose, however. The focus of her work is exploring how technology can be used to create art. 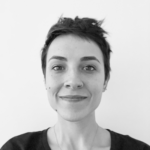 Hessel is a Brazillian-born artist living in New York City, who started experimenting with photogrammetry and 3D scanning about three to four years ago. From within the ITP degree program, she experimented with all sorts of technologies in art and design.

ITP is a two-year graduate program whose mission is to “explore the imaginative use of communications technologies,” and has the nickname of the “Center for the Recently Possible.” Hessel has created several art projects using 3D scanning tools, point clouds, and a mix of various digital media to showcase its potential for expression rather than only work.

“When I found this new tool, I was just amazed by the possibilities of capturing something in a volumetric way, and all the things you can do with that, and the stories you can tell,” said Hessel.

Hessel has developed a several different art projects using 3D scanning since she was first introduced to the technology. She’s used iPad-mounted sensors, cameras with depth sensors, and even Matterport cameras meant for real estate. Most recently, Hessel says she has been using an older phone equipped with the now-shuttered Project Tango software from Google to create the point clouds she uses in her art.

“With the Tango I was able to get something that felt like it was almost moving. It was meant for scanning spaces – I don’t think when they envisioned it they pictured scanning people, but the technology is there for us to play with.”

Her latest efforts have focused on the artistic potential of point clouds, especially when scanning people. Rather than seeing people in the scene as something to prevent a scan from taking place, she never quite knows what the outcome will be. She’s also worked to apply techniques on top of the resulting scans to enhance them.

“The outcome that I was particularly interested in was moving subjects. I really like the 2D versions of the 3D scan that looks sort of like a photograph and sort of like a painting but kind of in between.” 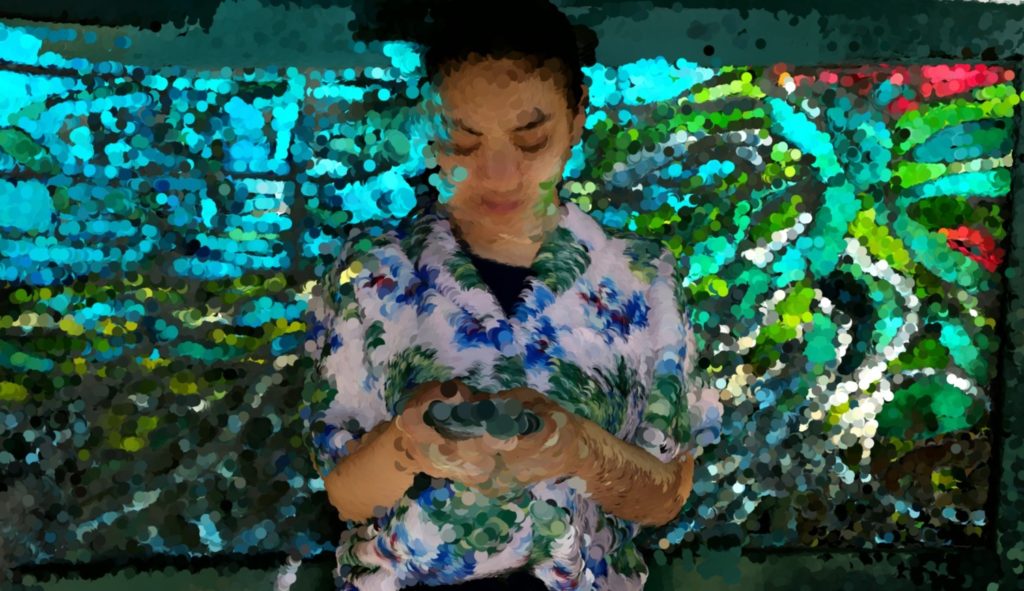 Hessel has also used 3D scanning in combination with 3D printing for a project called “Hidden in Plain Sight” that highlighted the untold stories and histories of New York City food cart vendors through mixed media. Hessel performed scans of several different vendors, turned them into miniaturized 3D prints and added additional visuals and audio to create a unique and engaging look at their lives. 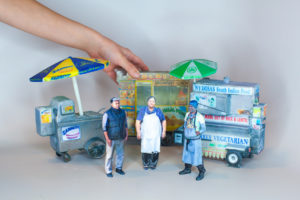 3D-printed subjects in the “Hidden in Plain Sight” project.

Currently, Hessel is working on a special project for ITP as it prepares to move to a new location this fall. The move from Grenwich Village to Brooklyn has a lot of positives (more space, better facilities), but will leave behind nostalgic memories for previous graduates and students at the program. She plans to 3D scan the entire space and create an online experience where alumni and faculty can experience it themselves, virtually, and will be able to listen to (and add) their own memories that have been recorded and placed into the space.

“What it comes down to is that it is just a tool. It is what you make with the tool that matters.”

As for her thoughts on technology – she is just as eager as some of the contractors and professionals I’ve spoken with about streamlining workflows, and figuring out what to do with the huge files created from 3D scans.

You can learn more about Michelle and her current projects on her website as well as in her online gallery.

The Evolution of Navy Pier into a 21st Century Icon