Esri announced this week the availability of CityEngine Web Viewer in ArcGIS Online this week, allowing anyone with a WebGL-enabled browser to navigate and explore uploaded 3D cities and environments created in CityEngine 2012. It is, in a word, awesome.

First, to get you up to speed, CityEngine is the software Esri acquired when they bought Procedural, a move announced at 2011’s user conference. It allows for the relatively rapid creation of 3D city models. It’s used in everything from video games and movies to development proposals and visualization. Until now, though, the models basically resided on someone’s desktop and it was difficult to share those models.

With Web Viewer, all that changes. Now anyone with a WebGL-enabled browser can not only navigate the models in three dimensions, but you can now search for tagged objects, turn layers created by the modeler on and off so that you only see what interests you, even adjust the lighting to reflect the sun’s position on a specific time of day on a specific day.

It’s potentially an incredibly powerful tool for any number of applications and professions, from architects to city planners to game development and plenty more.

According to the specs, I’m a little light on my graphics card (they recommend 512MB), but everything performed really well, except for the most robust model, that of Esri’s Redlands campus, which crashed my Firefox browser every single time I tried to load it. Not sure what happened there.

The city of Philadelphia loaded just fine. Looks like this: 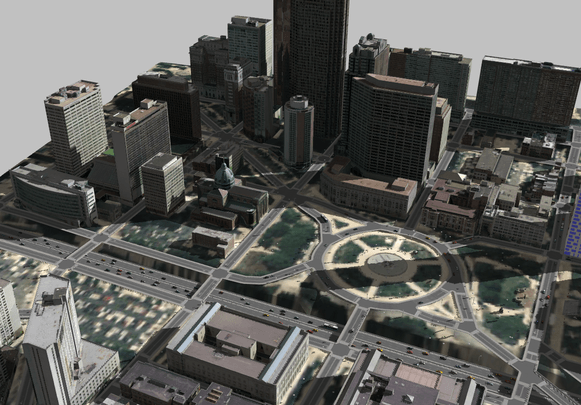 The rotation worked great and the layers were really impressive. You could turn off the streets, turn off the trees, even turn off the “street furniture.” Best of all, you could toggle the proposed new development between the building as proposed and the current as-built conditions. I just don’t see how that’s not a huge benefit to city councils and planning boards the world over, who can much better evaluate proposals, and even go so far as to see who’s going to get a new shadow and at what time of day. Just cool as hell.

But it’s not just real cities they’ve got up there. Check out the crazy space city of the future they’ve uploaded, which is built on something like a mobius strip:

The zoom capability is really smooth, in that you can either use a slider or a plus-minus button. I found the button to not have quite enough steps, so that you zoomed too rapidly, but the slider offered all the capability I was looking for and the button ended up just being a way to rapidly get in and out of what’s a very large model.

It’s not hard to see how this could be a great tool for collaborative game design, allowing designers of the actual graphics to share ideas with the writers of the game’s story arc even if they’re not all on site.

Finally, I checked out the Petronas Towers, in Kuala, Lampur: 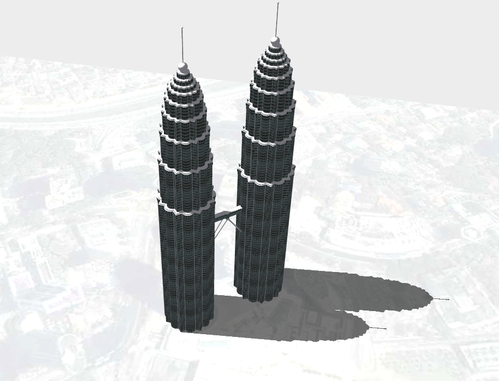 Again, not hard to see how an architecture firm making a presentation would love to have a tool like this, allowing a potential client to see the design from every angle, in sunlight and at night. What a way to show off your creations.

All three of these models loaded in no more than about two minutes (Philly was the longest, which makes sense as it’s the most robust data set), and all of them navigated completely fluidly with no lag. I also liked that you can toggle between 360 navigation with just drag of the mouse and a more standard drag of the mouse so you could reposition the “center” of what you’re looking at. It was very easy to get around and look at what you wanted to look at.

There are also easy options for sharing, with a bit.ly url created automatically for you, and buttons for email, Facebook, and Twitter.

The only major feature missing, I’d say, is an embed code so that these models could be embedded in a proprietary web site. If you were a design firm, being able to have these 3D models right on the home page would be sweet. Having to send people elsewhere is less good, but ultimately not terrible for a first go at this.

All in all, a great step forward for Esri and expanding greatly the utiltiy of the CityEngine software.