This past May, I received a call from Jose Cotto, president of CAS Architects, which is located in Mountain View, California and specializes in advanced technology projects. He wanted my help on a new job: His customer, Western Digital, had recently decided to terminate their lease on one building and consolidate both people and equipment into another building, which just happened to be the old IBM manufacturing facility in San Jose, CA.

While I have been evangelizing for a long time about using innovative technologies such as reality capture to improve AEC processes, CAS had yet to implement it on a live project. This project was different. Given the aggressive time line, Jose was finally asking for reality capture. I was excited and confident that I could help coordinate a successful solution for any project they could throw at me. That is, until they gave me a rundown of project challenges.

Access to the project site not only required approval and an escort, but also gowning (dressing in bunny suits) to access active cleanrooms, which comprised a good portion of the building. Even the non-cleanroom areas were typically locked, and accessing them required coordination with multiple people from Western Digital’s facilities group, who were dispersed throughout San Jose.

This challenge was a no brainer! A “3D Tour” would solve this problem and allow CAS to walk the project site virtually at any time using their desktop browser. They could save anywhere from 2 to 3 hours commuting, checking in, and gowning up, and this would increase their productivity on the project.

Here is a breakdown of solutions listed with their underlying technologies, equipment costs and capture (labor) cost per square foot.

(For a complete look at low to mid-range solutions, please see my technical review on 3D tour solutions for real estate from about a year ago published on the We Get Around Network. You can also download the full PDF report.)

CAS also needed to extract dimensions–to accuracy of about an inch or 2-3 cm–from the solution we’d deploy. Due to the complexity of the facility and limited access, it was virtually impossible to manually document every dimension they might need for project planning. The dimensions they already knew they needed included length, width, and height of rooms, doors, ceilings, and structural elements, but also similar measurements for critical technical equipment. 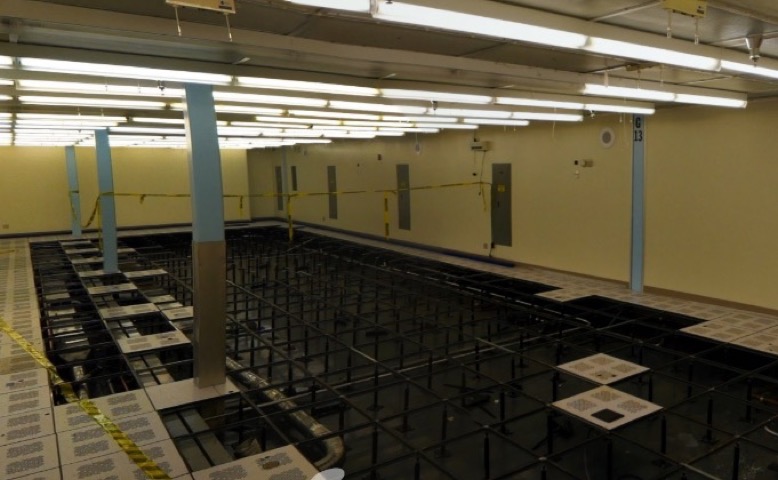 This challenge eliminated the possibility of using any solutions based on 360 imagery and photogrammetry, since the accuracy level cannot be guaranteed. It also eliminated iGuide from the running, since that product only supports dimensions within the X/Y plane.

This left us with just four potential solutions: Matterport, FARO, Leica and NavVis.

As mentioned previously, the building is complex not only because of the type of facility, but also because of its size, which is just under 300,000 square feet (27,500 square meters).

The size of the facility eliminated Matterport as a potential solution, because it couldn’t scale to support this size facility. We thought of creating 12-15 separate Matterport tours and connecting them via MatterTags, but we decided that the complexity of the building, closed rooms, and long corridors (up to 625 feet long!) would have been difficult to capture and awkward to use.

The short project timeline also eliminated the possibility of performing terrestrial, high-definition laser scanning with FARO or Leica. Since we used 10 minutes for our benchmark between scan locations (this included 7 minutes for the colorized scan and 3 minutes for logistics to setup the next location), and estimated about 600 scan locations for the facility, this equated to 100 hours or about 12 days for the whole project. 12 days didn’t work! Deploying multiple scanners wasn’t going to work either, since each scan technician would require escort by a Western Digital facilities team member.

NavVis is a recent newcomer in mobile 3D scanning and has yet to be fully adopted in the US market. Although I hadn’t tested NavVis on my own, I was able to include them as an option through my testing of their sample data, research, and discussions with their North American team. Their solution is designed for fast data capture, and they claim scanning speeds of 21,500 to 54,000 square feet (2,000 to 5,000 square meters) per hour. Taking into consideration the challenges of our project, we used a conservative scanning speed of 20,000 square feet per hour.

For this 300,000 square foot building, this came to 15 hours, or two long days. NavVis checked all boxes! 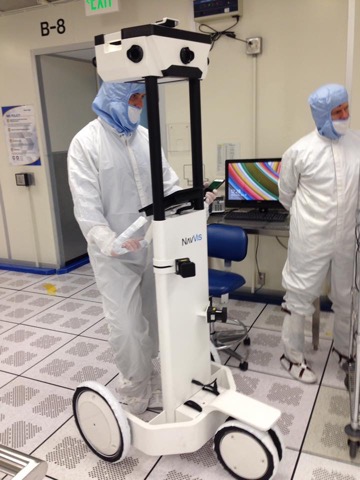 I helped CAS prepare to pitch the NavVis solution for this facility. We had concerns about getting approval for such an ambitious project, especially when requesting access to active production cleanrooms. I was very surprised when I received an email from Jose about two weeks after the pitch saying that our reality capture proposal had been approved at all levels and Western Digital wanted the project done as soon as possible.

Although NavVis is working on expanding their service provider network in the US, we had issues moving forward due to the short timeframe. Lucky for us, the NavVis North America division was willing to perform the reality capture for this project within a week of approval.

I must admit that, going into this project, I was a little nervous because I hadn’t tested NavVis. My typical method of operation is to go through an ultra-intense vetting process on any new solution. Plus, CAS, a company I’ve had a relationship for many years, was putting their faith in my experience and knowledge to deliver a successful solution. No pressure!

We started the reality capture process in late June and were given three days to complete the project. We had decided to add an extra day to our original two day estimate to account for the unknown.

I was present during the entire scanning process, but my involvement was more for moral support than for scanning help. However, it gave me the opportunity to ask questions and gain a ton of insight to the NavVis scanning process, underlying technology, and company strategy. I think after three days of my questions, the NavVis team was overdue for a beer (ok, maybe two or three).

Although we had a reference floor plan of the building and discussed the scope numerous times, we were still overwhelmed with the scanning logistics. The building was originally constructed by IBM in the 1970’s, and the footprint has grown and changed numerous times over the past four decades. On many occasions during the scanning process, we found ourselves asking our Western Digital escort (or I should say, guide), “Where are we again on this map?”

Since the reality capture had to be performed during office hours, people were bound to start asking questions about this large piece of equipment on wheels with lidar scanners and cameras. So, when I wasn’t asking the NavVis team myriad questions, I found myself running interference for the scanning team. What I discovered in these conversations with facility team members was that there were many spaces in the building they had never seen. They were excited to finally explore them, albeit virtually.

When all was said and done, we did manage to finish with a total of 51 datasets in three days, which was impressive. During the first two days, we performed nine hours of scanning and finished up the last day with six. The total 24 hours of work resulted in about 12,500 square feet (1,150 square meters) of scanning every hour. The processed 3D Tour and point cloud was delivered a week later via the user-friendly NavVis IndoorViewer. 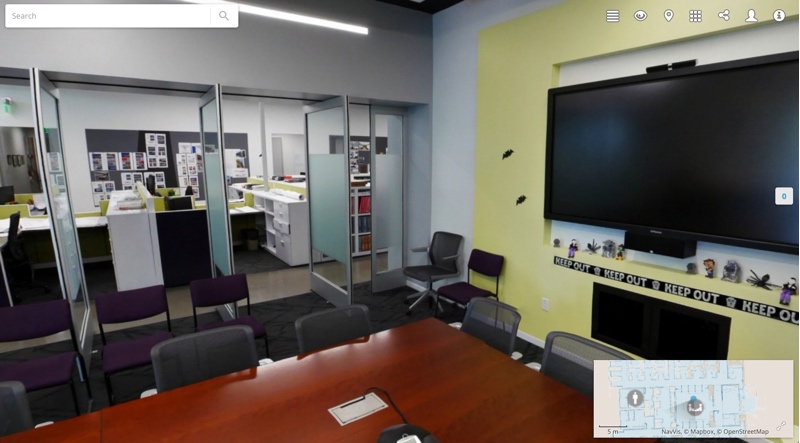 Screenshot from a NavVis Tour of the CAS office

Virtually walking the space and taking measurements from their desktop browser has become essential to the daily workflow at CAS Architects. They’ve extended 3D Tour access to the entire project team. Western Digital’s facility team, located at the building scheduled for shutdown, uses the 3D Tour to avoid the one-hour round-trip drive to inspect the project site.

The NavVis 3D Tour has also become the centerpiece for weekly project team meetings. The visual documentation supports the team in identifying problems cooperatively. Although most problems would have been discovered days, weeks, or months later, they are being caught much earlier in the planning process. With the discovery of the very first problem, the reality capture investment was completely recovered.

An interesting use case has been to plan the movement of equipment through the building using the 3D Tour. This involves taking measurements of equipment and then walking the space while reviewing clearances and finding the best path.

I may talk about the benefits in the past tense, but the NavVis 3D Tour will continue to benefit the project team through the end of 2018 – their deadline for project completion. There are still many months of planning to come that will exploit NavVis data.

Suggestions regarding the NavVis solution

There were some areas within the building that we were unable to capture using the NavVis trolley. If I were to take on another project using NavVis, my top feature request would be to enable the import of data from other capture solutions to augment their data. NavVis recently added the ability to import point clouds from other systems, but we could have benefited from additional 360 images in complex areas. 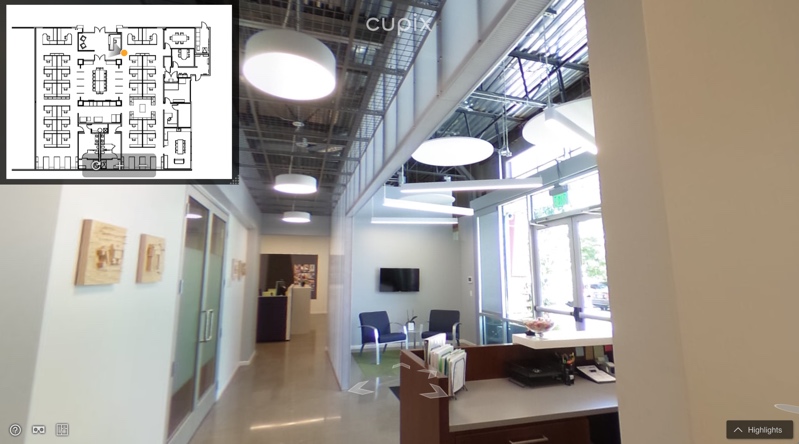 Screenshot from the Cupix tour of the CAS office.

What started as a project for an architect to get his feet wet in new technologies has evolved into a showpiece for the use and benefits of reality capture. The entire project team, who saw (and continues to see) the benefits firsthand, has changed their mind about reality capture–no longer thinking it’s too expensive or too complicated.

CAS Architects is now using reality capture as a part of their service offerings. They leverage a NavVis 3D Tour of their own office for demonstration purposes. I continue to consult with CAS on their technology endeavors and they allow me to use their office as a testing ground for various solutions. You can view the NavVis 3D Tour of the CAS offices below, along with some other lower-cost solutions being considered for use on other projects.

The success of this project has opened discussions on other reality capture benefits for Western Digital’s ongoing facilities management efforts. Western Digital has commissioned another NavVis 3D Tour for planning on another building at their San Jose campus.

Paul Collart has been eating and breathing software development and workflow integration for the past 25 years. With a B.S. in Mechanical Engineering from Santa Clara University, he followed his interests in CADD & Architecture into the technology sector of the AEC industry. He founded Technesis in the late 90’s, taking it from an AEC technology consultancy to an Enterprise Print Management software company. After selling the company in late 2015, he has been immersing himself in the latest technologies for the AEC industry.