AR, VR and GIS have finally found each other

What are AR and VR?

First, let´s discuss the terms AR and VR. Virtual Reality describes a situation where the user is disconnected from the outside world, but is present in a virtual word that doesn´t exist. Augmented reality is a different experience, as it incorporates the outside world but augments it with digital information. An example of AR is Pokemon GO.

There are many different input devices available geared at different types of applications for AR and VR. Think of VR headsets, but existing mobile devices can also be used for both VR and AR.

How can geospatial technology be used with AR and VR? 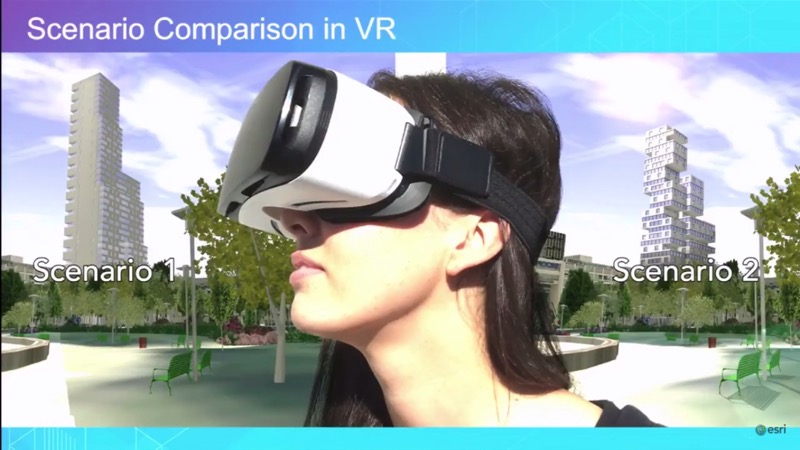 Recent examples of AR and VR combined with geospatial technology

ArcGIS 360: a mobile VR solution
ArcGIS 360 VR is a mobile or web based app that allows users to quickly immerse themselves into 3D city models by teleporting to static viewpoints and comparing different urban design scenarios. The app is meant for the public and stakeholders with no GIS or 3D expertise that need to experience a 3D web scene in an immersive way. The app functions like a “street view” app where you can just look around from a static viewpoint and teleport to another panorama—basically, going to another point in space without actually having to physically move.

The app introduces a new file format, .3VR, that is a zip archive containing a JSON and JPEGs.

To generate an experience like this, users 3D content with CityEngine software, then host it through ArcGIS Online or Portal. Users consume it through the mobile app that is available for the Samsung Gear VR headset on the Oculus platform. While the first release of ArcGIS 360 VR was released in December 2016, it received an update last July, adding support for the Gear VR hand controller. 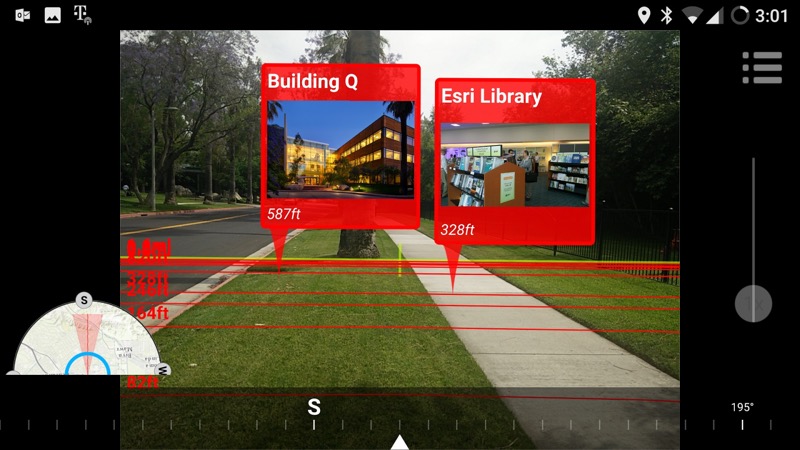 Desktop VR
A similar workflow was demonstrated at the latest Esri DevSummit in Palm Springs, showing how 3D content from CityEngine can be used in Unity, a cross-platform game engine for developing mobile, browser, console and desktop games. This content can then be used for VR apps, as Unity is also an entry point for developing VR apps for headsets such as HTC Vive, Oculus Rift, Gear VR, Hololens and more.

The AR experience is provided by a render with a transparent background that is placed on top of a mobile phone´s camera feed.

Both capabilities can be added through the API to any existing 3D runtime app. In a live demo, Esri showed how to project a 2D map of Paris from ArcGIS Online onto the outside world. Using this interface, users could request address information in real-time by clicking on the map or using a hand controller. This application is currently part of a private beta program, limited to Runtime SDK for .NET and targets high-end mobile devices.

AuGeo
Last July, Esri Labs announced a new mobile augmented reality app for GIS data called AuGeo, which allows users to bring data from existing ArcGIS point feature layers into an augmented reality mobile app. This is a research project from Esri Labs and not much information or use cases are available yet. Sensor and data quality are crucial to successfully locating (hidden) assets with the app. The AuGeo app is available for free in the iTunes and Google Play stores, but can also be downloaded through desktop installation files.