Earlier this year, we talked about Apple’s stand in the VR, MR, and AR industries after the U.S. Patent and Trademark Office granted Apple’s Israeli team a new patent focused on 3D depth mapping technology.

So, what is it that Apple did in the past 6 months to help these industries grow? 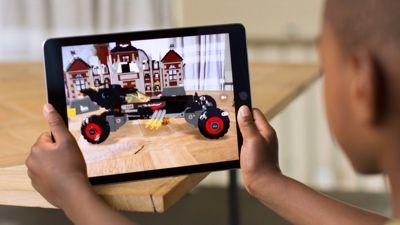 Announced in June 2017, the ARKit is Apple’s bet on Augmented Reality (AR). It is a mobile platform for developers to create AR applications to run on any Apple iOS devices that includes the new A9+ processor.

As we have discussed in the past, there are other competitors in the industry that already have years of experience in this area, such as Microsoft and its HoloLens, and Google with its Tango. Apple has been slow, and we were expecting the company to enter the space long ago when CEO Tim Cook reportedly showed interest in AR.

Apple’s ARKit offers a similar user experience to Google’s Tango, but the difference here is convenience.

While Tango demands special hardware to work, Apple promises that any recent iOS device can perform “fast and stable motion tracking” that allows applications to realistically place virtual objects in the real world, all without the need of any external hardware. Although we have seen different companies promise the same, the “made with ARKit” webpage shows how successful Apple’s AR platform has been in such short period of time. Even Pokemon GO, the app that truly made augmented reality sparkle last year, will look even better this time around.

The ARKit also opens various possibilities for the AEC industry to take advantage of, and maybe become part of the next architectural toolkit. The video below explains why.

A Laser Sensor on an iPhone

Recently, a rumor spread indicating that Apple is “working hard to add a rear-facing 3D laser system to the back of one of the new iPhones.”

Although this is all speculation–and Apple hasn’t commented–it would actually make sense, especially with the ARKit’s release. A laser sensor would enable simple scanning and better depth detection for augmented reality apps, as well as a more accurate type of autofocus for photography, meaning a better, and more realistic AR experience.

ARKit: a fit for Virtual Reality

After the ARKit announcement, Apple quietly updated its iOS Maps application with a Virtual Reality mode that allows users to fly over various locations in a digital map by walking through your real-life environment.

Although Apple has not confirmed, different sources says the VR mode uses ARKit for positioning, since “it displays a message when you cover the camera, just like any ARKit-powered app does, saying you should aim the device at a different surface because “more contrast is required”.”

Interestingly enough, the AR platform establishes where you are in the physical world and keeps track of your surroundings—which means it may be a crucial part of Apple’s VR play as well.

Nexus Studio, a company that produces film, animation and interactive content, used an iPhone 7 and the ARKit to create an example VR experience. It positions you in the virtual world correctly while mapping your real surroundings with a 3D point cloud to help you avoid hitting obstacles around you.

Sensor Motoric is known for having developed a popular VR technology called “foveated rendering”, which was showcased in different events earlier this year, such as CES and GDC.

This technology helps a VR headset save power by only showing you a high-resolution image of where you’re actually looking, while anything in your peripheral vision is less high-resolution.

It’s not quite clear what Apple pretends to do in the future with this acquisition, but it does show how willing the company is to develop new and better technology for both industries – AR and VR.

6D.ai: Why effective AR needs a crowd-sourced point cloud of the whole world